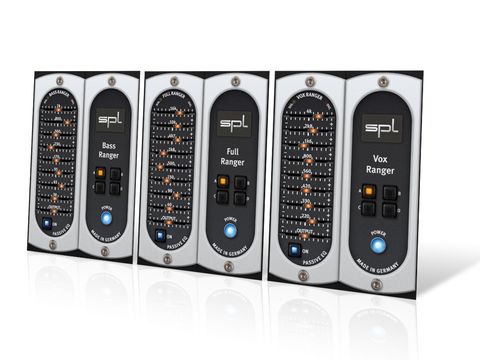 This is a solid effort from SPL, and the tone is right on the money, but a few tweaks could make the pack more usable.

Graphic EQs are a rarity in the studio. They're something you associate more with PA tuning or car hi-fis than precision tone-shaping in the control room.

However, SPL (Sound Performance Labs) has been successful with the EQ Ranger hardware series because it designed a graphic equaliser from a musical standpoint, rather than a technical one.

Traditional graphic EQs have equal octave or third octave bands that don't bear any relationship to the subject material, but the concept of the Ranger series is to devise bands that relate to the character of the sound in question.

Now, SPL has translated them to native plug-in formats under the guise of its new Analog Code software range.

The Vox Ranger is an eight-band passive-style EQ model, with most of the bands centred around the presence and mid-range frequencies between 220Hz and 4kHz, giving 15dB of cut and boost on each band.

The great thing about graphics is that you can very quickly try each band to hear its effect. For vocals, where the tonal nuance is everything, the smallest tweak can have a profound effect.

Obvious vocal uses aside, when mixing guitar, for example, you can use the 1.6 or 2.8kHz bands to add bite, and 560 and 800Hz for fullness. As for piano, you can control the brightness of the percussive attack with the 2.8kHz band and sort out any woodiness with the 420Hz control.

In all cases, the bandwidth of each control feels good in that it's not too narrow to create an ugly notch, but not so wide that you lose precision. There aren't the bands available to help with extreme top-end air or rolling off rumble, but the idea is that this module is used in conjunction with the Full Ranger to cover all bases.

The Bass Ranger is also an eight-band passive graphic, with all bands below 2kHz and five at or below 500Hz. The key bands are 65Hz for trouser-flapping tones, 95 and 170Hz for tight bottom-end and 230Hz for clearing out low-mid cloudiness. An even lower band at 30Hz is there to sort out excessive sub energy.

Aside from sorting your low-end out, the Bass Ranger comes in handy on kick drums, with the 65Hz band ideal for weight and 95Hz slider bringing in chest-thumping tones.

For guitars, it's good at gluing the low-end of distorted numbers to the bass and kick drum. It's also good for mastering, where precise shaping of the lower bands can help your mix.

Again, the bandwidths are sensible, but a tighter notch can often be useful for characteristic bass sounds.

The Full Ranger is, as you may have predicted, another eight-band passive, covering the entire audible range from a subby 40Hz right up to 16kHz at the top. The bands aren't entirely equidistant harmonically (40, 90, 150, 500Hz, and 1.8, 4.7, 10, 16kHz) as they're tuned to frequencies that are tailored to complement the other two more specialised Rangers.

However, they could all benefit from having an input level control - to avoid distortion with a hot recording.

Also, the four settings buttons, which let you quickly try out different shapes, could be more useful if they enabled you to copy and paste between them for comparisons. Being able to bypass individual bands would also help the setup.

Nevertheless, this package would make an excellent addition to your tonal armoury and it's much quicker than the conventional parametric approach.

Hear how the EQ Rangers can be used on a bass part: