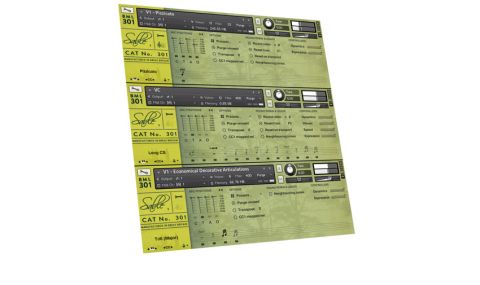 Hot on the heels of its much-admired Albion orchestral collections comes Spitfire Audio's Sable String Vol. 1 - a set of string sounds designed to aid the writing and production of more focussed violin and cello parts.

Music makers want many different things from string libraries. Pop producers tend to crave broad, sweeping articulations to lend greater authenticity to their pad-like writing while film and TV composers need a vibrant palette of string 'colours' when scoring to picture. In recent years, British orchestral library developer Spitfire Audio has steadily amassed a set of orchestral collections appealing to both camps; its Albion libraries has provided a striking balance between a great sound and a set of rather easy to use articulations.

Considering these their 'broad brush strokes', Spitfire have returned with what will soon become a new series of titles called the British Modular Library. These will provide finely detailed and focused sounds, with the first out of the starting block being the appropriately titled Sable Strings Vol.1.

Vol.2 will provide Violin 2 and Viola sections with different players to ensure that, when used in combination, these patches provide staggering levels of authenticity. Vol.3, expected in June, will expand the range of articulations further.

While Sable has proved perfect for small ensemble scoring, it has broader uses as we'll soon see. As you would hope, a large number of articulations is offered for both the Violin and Cello instruments. However, as well as providing a brand new pair of string sections sizes, Spitfire has widened recording engineer Jake Jackson's remit by asking him to capture a larger range of microphone positions.

Of course, you can load the programs for these simultaneously to create bespoke section 'sizes and ambiences' of your choice, expanding the palette of colours as you do. There are even surround-ready programs.

Quite aside from using these patches on their own, Spitfire Audio has taken steps to ensure that the Sable programs are fully compatible with the Albion Libraries. The Albion Overlay programs within Sable provide a matched set of articulations for each of these, so you can add Sable's presence and 'front end' to the rounder, bigger sounds of the full Albion libraries.

Used in combination, this enables you to create a richer sounding, more focused string section with extensive MIDI CC options available to fade in a powerful orchestral sound underneath Sable, or vice versa, to bring extra focus and detail after a richer orchestral start.

If you've read my other reviews of Spitfire Audio's libraries you will know we're huge fans of this company and their great sounding scoring tools that are both intuitive and flexible to use.

Sable Strings Vol.1 offers a glimpse into Spitfire's promising future. We cannot wait to hear the forthcoming volumes and to see similar levels of sonic detail emerge for other orchestral sections over the coming months.