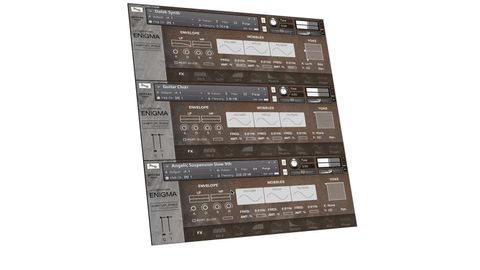 Sonically rich and diverse, it will appeal to composers, producers and sound designers alike.

Leo Abrahams may not be a name you've heard but there's a good chance you'll have heard his music. Whether in his role as producer for Wild Beasts and Paolo Nutini, with his own artist project The Unrest Cure, or via his role as a film composer on projects including The Lovely Bones and Hunger, there is no shortage of creative areas in which he's involved.

His latest project teams him with Spitfire Audio to produce a Kontakt- powered sample library called Enigma. Whilst Spitfire Audio is primarily associated with orchestral sample collections, its catalogue includes a broader range of soundtrack-oriented libraries these days. Into this category, Enigma can be placed, joining Hans Zimmer's Percussion Library in Spitfire's Signature Range.

The library is a celebration of Leo Abraham's unusual and sonically rich guitar recording, with the vast majority of it generated by a rusty Trussart guitar, which he's patched through a dizzying array of guitar pedals.

Unlike most guitar sample libraries, editing has been undertaken not only to provide obviously guitar-based content, but also a beautiful collection of pads, atmospheres, sequences, musical phrases and warped atonal beds and effects. These are organised into folders, whose names are self- explanatory.

In Pads, you'll find a ready-made collection of simpler pad flavours, whilst the Mutated Pads equivalent provides more complexity. The Rhythmic Sequences folder could be more generous but what's here is great - bubbling, glitching and evolving sounds, which loop in time with your track. The FX collection features shrieks and squeaks, often generated from unusual playing techniques, including some behind the bridge.

Enigma's GUI provides additional tools, with onboard effects including reverb, delay, lo-fi and distortion. The interface also offers low and hi-pass filtering and LFO control over volume, pitch and filtering, all of which can be 'taught' MIDI controller assignments.

On the right-hand side, an X-Y controller Yoke provides track-pad control. Some patches trigger phrases based around one chord or key, but Kontakt's own pitch dial can be MIDI-mapped without affecting the playback speed. However, as some of these patches feature only a narrow band of active keys, in some, I would prefer to have alternative tunings mapped to empty octaves.

This minor gripe aside, Enigma has a lot to offer and that becomes clearer when considering to whom this library will appeal. Like most of Spitfire Audio's libraries, film and TV composers are catered for first but Enigma will also find favour with record producers for its array of unusual content. Equally, there are plenty of less musical, more 'out there' programs, which will pique the ears of sound designers.

If we've covered a wide number of potential users, that's deliberate - regardless of the music you make, Enigma has character and inspiration by the bucket-load.