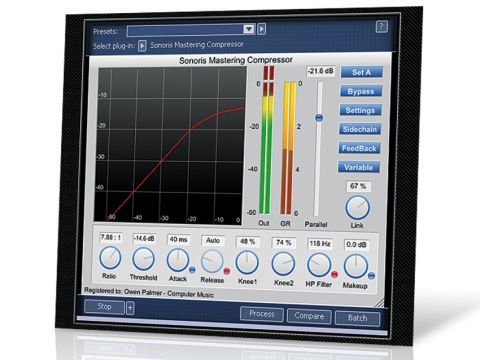 Sonoris' Mastering Compressor is one of the very finest dynamics tools we've ever loaded on our master bus.

Every aspect of the design suggests that Sonoris has put clarity and transparency at the top of the priority list, and the developer claims it has completely eliminated the odd harmonic distortion that compressors usually exhibit.

"Mastering Compressor represents a technological breakthrough: it's the cleanest compression we've heard to date, and it's capable of extreme punch when required."

In testing, the first thing that struck us about Mastering Compressor was its flexibility. Operated via a clean, clear and decidedly old-school interface, it allows ratios from 1.01:1 to 100.0:1, and then Inf:1 (for use as a brickwall limiter).

The threshold goes down to -60dB in 0.1dB increments, and the attack and release knobs can be set to lightning fast or invisibly slow.

The most interesting aspect of the controls isthe fact that both envelope stages have Auto modes. We were initially sceptical at the thought of automatic attack and release settings on a mastering compressor, but they really did seem to adapt well to the majority of material we tried (mostly finished mixes and drum busses).

In those instances where it didn't work so well, we felt that the attack was perhaps a little too punchy; however, we found ways to bring this into line using some of the more advanced features, such as the Parallel Mix slider and sidechain filter. Incidentally, the sidechain signal can be monitored, and the filter can be switched between high-, band- and low-pass modes.

You can also decide whether you want the sidechain to come from the input signal (feedforward mode) or from the compressor's output (feedback mode). The latter's release phase is two-stage, making the compression much smoother and the results less aggressive.

If you're working with a well-executed mixdown that's properly balanced and has good tone, Sonoris' surgical compressor offers dynamic control at the mastering stage without any unwelcome colouration or distortion.

Obviously there will still be times when that little extra something is required, but Mastering Compressor gives you the option to separate colouration from dynamics (even-harmonic distortion can be added or bypassed with a single switch). While the compressor is clearly designed from the ground up to avoid artifacts, you can enable 2x, 4x or 8x oversampling to minimise them even further.

Arrow to the knee

Mastering Compressor has two knee controls. The first - Knee1 - softens the default hard-knee operation so that the compression amount is applied along a gentle curve as the signal approaches the threshold, just like a regular soft-knee mode. The Knee1 knob works on a percentage scale, with 0% (Off) representing the hardest knee and 100% the softest.

The second knee knob also operates on a percentage scale, but governs a much more interesting aspect of the dynamic response. In effect, Knee2 is a second knee at the top of the compression curve, gradually returning the loudest parts of the input signal from their compressed ratio to a 1:1 ratio (in other words, no compression) as they exceed the threshold. This is useful for letting peak transients through, giving further transparency.

In combination, the two knees enable you to design the perfect compression curve. Both are fully automatable.

For us, Mastering Compressor represents something of a technological breakthrough. It's the cleanest compression we've heard to date, and it's capable of extreme punch when required.

It also has all the features you should expect in a top-quality mastering compressor in 2012, including A/B comparison, variable stereo linking and sidechain mid/side separation if required. Needless to say, we found it supremely useful as an advanced mixing compressor as well.

On a critical note, switching between filter modes could be smoother-sounding, and it would be nice to have the options presented in menu format so that you don't have to click through unwanted settings to get to the one you want. There's also no automatic gain make-up, and the output meter has no numerical readout.

But these niggles are far from deal-breakers. Hats off to Sonoris for what has to be considered a breathtaking triumph of dynamics processing.