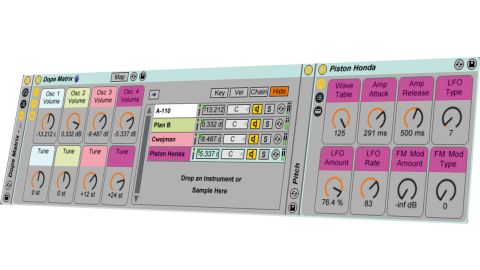 By chasing the Push modular vibe, Sonic Faction have built a synth that succeeds in its own right.

The latest in Sonic Faction's line of Ableton Live-only instruments is Dope Matrix, a live pack containing simpler racks, presets, live clips, and a Max For Live step sequencer, combining to give you something of the sound and vibe of using 500 series rack-style modular synths, sampling real-world hardware oscillators from The Harvestman, Doepfer, Plan B, and Cwejman.

What makes it even more interesting is the level of integration with Live's associated hardware, namely Ableton's Push, Novation's Launchpad, and Akai's APC40.

Dope Matrix installs like any typical Live pack - then you're ready to browse through the 100-plus presets, which are helpfully tagged with long, descriptive names and categorised by type: bass, lead, pad, ambient, and so on.

The Pulsar pad and the Revenge bass are good examples of what Dope Matrix is about. Each loads with all four oscillators in individual chains, so you can mix their volume levels, and with some of the custom audio effect modules such as Mod Squad already in line. Everything's neatly colour coded, labelled, and ready to run from your hardware. The most interesting sounds are definitely achieved by combining the different modules.

Things really get going, however, when you pair the step sequencer with a supported hardware device. We were using Push - the sequencer uses Push's grid to enter notes, accents, chords, and to select scales - all of which are accessed from the top row of buttons. It has four 'lanes' of modulation where you can sequence up to four instrument or effect device parameters simultaneously.

The sequencer, being a typical Max For Live device, can also be applied to other Live devices, and third party plug-ins, not just the Sonic Faction ones, which makes it more versatile and more likely to be used!

Dope Matrix, being basically a bunch of tarted-up Live devices, doesn't substitute for the true vibe of hardware synths, but with the right controller connected, and the sequencer running, it's in the neighbourhood.

This is a great example of how versatile and powerful Push can be. The presets are better than average, and easy to customise - the whole thing screams 'take me to your next gig'. You don't have to be a synth nerd, either; you can take Dope Matrix for what it is, an enjoyable, simple, and affordable, expansion to your Live Library.