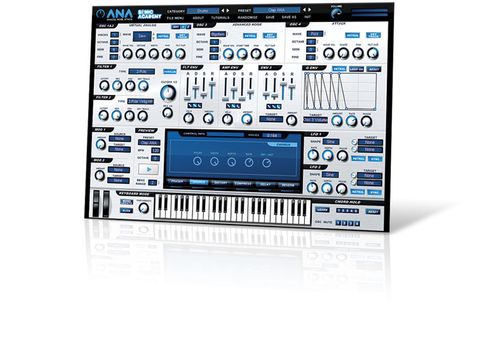 Thanks to its PCM-based engine, ANA sounds big, bold and beautiful, while its solid feature-set seals the deal.

ANA has four oscillators: the first pair are virtual analogue, with all the usual analogue waveforms: saw, sine, triangle and pulse waves of various width percentages (as you can't modulate the pulse width).

These rather rudimentary shapes are joined by a range of digital waveforms with names like Bellmonic, Blade and SawTalkEE, providing more interesting harmonic content for the dual filters to chew on.

Oscillators 1 and 2 can be fattened with up to eight unison voices that can be detuned and widened for some real girth. They can also be panned, mixed to either filter and set to retrigger on each keystroke (or not). Speaking of which, the key tracking can be disconnected for non- pitched sounds.

You can also adjust octave, semi and fine tuning on all of ANA's oscillators. Oscillator 3 is called Advanced Noise. It provides a selection of 20 sampled, noisy waveforms, ranging from the tinny Chim Ns to the massive, tuned Mgsw 2. Again, retriggering and key track are here, but this one differs from oscillators 1 and 2 with a Start Time parameter.

Oscillator 4 is the Attack oscillator, providing 19 sampled attacks from various instruments including basses, guitars, electric piano and bell. This time, the common oscillator parameters are joined by a Shape knob that seems to truncate the sampled waveform. Anyone who's ever played a Roland D-50 can appreciate the possibilities of combining short, transient waves with longer synthesised waveforms.

Sadly, none of the oscillator waveform selection parameters can be modulated, so classic wavetable tricks are out. That's too bad, as ANA's graphic envelope could have worked wonders with them.

About those envelopes... In addition to three standard ADSR envelopes (amp, filter and one assignable), ANA also offers a nifty G Envelope. Syncable, loopable and with up to 16 stages, this hand-drawn modulator can be used to create everything from rhythmic pseudo-sequences to rapid-fire trills (check out the clap presets).

Other mod sources include a couple of syncable LFOs and a pair of slots for routing external controls (and all internal modulators) to all viable targets. ANA also has a handy chord function that assigns multiple note intervals to a single keystroke - very effective for trance stabs and the like.

ANA's dual filters can be run either in series or parallel. There are 13 modes, including vowel shapes, and they sound good, with real squeal and squelch when pushed. The built-in effects include reverb, delay, chorus, compression, phaser and distortion.

Obviously, ANA isn't just another 'me too' virtual analogue. The sampled waveforms provide a rich resource for the filters, and the instrument is capable of some terrific sounds. We wish it were easier to add our own samples, though, and the lack of PWM is a letdown. Also, we couldn't open it in energyXT2, so if you use that particular DAW, be sure to try the demo first.

Nevertheless, the instrument sounds very good, with a distinctive, modern flavour, and it is well worth the asking price.