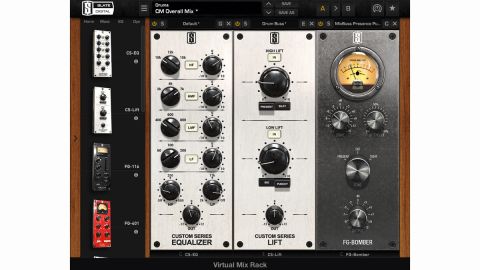 FG-Bomber is a solid alternative to regular dynamics processors.

On initial release a year ago, five such processors were available, four of them bought as a bundle (FG-N 'Brit-N' EQ, FG-S 'Brit-4K' EQ, FG-116 FET Compressor and FG-401 VCA Compressor), the fifth (Revival, a simple two-band EQ) included with the VMR rack itself - which is a free download - as a 'taster' option. A physical iLok 2 key is required for all VMR authorisations, including the rack and free plugin.

When VMR was launched, it was made clear that further modules would follow - and indeed they did. The first was a revised version of Slate's Virtual Console Collection, plus a free gain and phase reverse module (Trimmer). Now, the second wave is upon us in the shape of the two-module Custom Series Bundle ($149), comprising Custom Series EQ and Custom Series Lift, and FG-Bomber ($99), described as a "dynamic impact enhancer". Here we look at the FG-Bomber.

Achieving punch, depth, liveliness and impact in sounds and mixes requires tailored use of compression, saturation, transient processing and, often, filtering. FG-Bomber combines all of these in a single plugin with just three controls: Drive, Intensity and Tone.

The first two set the input level and effect blend, and the meter includes a handy target marker for optimising levels. Meanwhile, Tone offers three options, focusing the processing on the mids (Present) and lows (Fat and Tight).

Clearly, FG-Bomber is one of those 'black box' processors, but it's one capable of doing good things to a range of sources when handled with care. For isolated kick and snare drums, light Intensity settings bring up the tail, but as you wind the intensity up, transients are increasingly squashed; and the Tone setting simply focuses this effect towards its designated frequencies.

On mixed drum material, high Intensity settings can easily suck the life out of the signal, and once again, playing it safe pays dividends in the form of a more energetic sound. As the manual says, a little goes a long way.

On both synth and electric bass, the Present Tone setting adds real bite, while the other two Tone settings increase weight. In all cases, keeping the Intensity to around 30-40% achieves the best results by far; and on fully mixed material, extra care is required to avoid pumping. However, a little Intensity (up to 20%) livens up loops and submixes nicely.

Put it on the slate

All three of Slate's new plugins make worthy additions to VMR, offering a fresh take on analogue-style audio processing. We're still quite disappointed at the lack of internal rack routing options in VMR though, and the inability to use the plugins on their own away from it (or at least to collapse the interface down to show just the modules you're using, for instance).

Even so, we'll park that thought for now, and sum up by saying that this trio of new modules makes an excellent addition to the lineup.