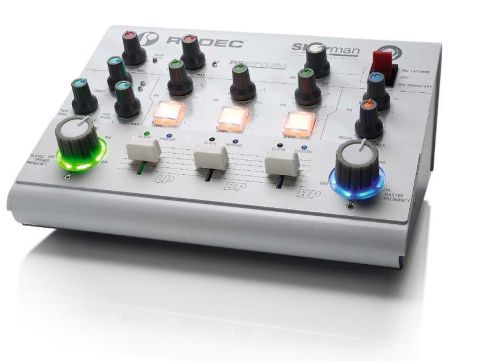 Anyone who's lusted after a more controllable version of the Filterbank will love the Restyler.

Sherman has become a cult name in studio gear circles, owing largely to the wildly chaotic power of its Filterbank units.

The Restyler is the company's second product and a collaboration with Rodec, which is well respected for the quality of its DJ mixers. Don't ignore this because you think it's a filter for DJs only, though: the love child of this relationship is a tidy desktop stereo filter unit with the look of a precision piece of lab equipment.

The clean white sloping front panel is at optimum viewing angle, and places all the controls at easy disposal. The size of the hardware and the spacing are all spot on; it's very comfortable to use, and built to a high standard.

Round the back are the inputs and outputs of this stereo filter. You can connect in with XLR, 1/4-inch jack and RCA cables, while outputs are the same minus the XLRs. These are available as an expansion, and there are holes cut in the unit ready for them to be fitted if required.

A thread screw connector is used to attach the external power supply, and a manual also comes in the box.

Inside the Restyler is a multimode three-way filter, with low-pass, band-pass and hi-pass. The volume of each filter band is controlled by the three up-faders, which are detented in the middle position. These can be combined in any way and are all connected to the same Master Frequency dial on the right.

This nice, chunky dial is bigger than usual which gives you greater precision when programming (it also has a cool blue backlight).

Over on the other side is a similar sized dial with blue and green lighting. This serves a dual purpose and is used to set the Slave/ Trigger frequency depending on the mode. Above this is the trigger section - its three dials are used for setting the sensitivity, speed and slope of the envelope follower.

"Inside the Restyler is a multimode three-way filter, with low-pass, band-pass and hi-pass."

When the unit is in Trigger mode, the big dial can be used to hone in on the selective frequency range to trigger the envelope. So if you want it to trigger on the kick, set it down in the bass end; aim higher up to follow the snares; and all the way up to get the rhythm from a hi-hat pattern.

In the middle are three green dials for adding amplitude modulation to each frequency band. AM can be added in positive and negative directions and is affected by the shape of the envelope follower.

This can be set to sweep smoothly like a sine wave, or gradually sharper until it becomes a square wave at which point it chops and stutters the audio. Below these dials are three buttons for attenuating the slope of each frequency band and switching between the two audio processor modes. On the far right are the resonance and FM rotaries and above this is a three-position rocker switch.

The last three dials are for the mix, input and make up gain. The three-position rocker switch is set up for cutting hard between the mix and dry signal and seems solid enough.

When any of the slope buttons are down, the Restyler enters dual filter mode. This uses a master and slave frequency to act on the incoming audio.

Between the three band faders and slope buttons there are 24 combinations of filter response. This is where one of the more unusual features begins to come into play. Each band has two LEDs, which blink between blue-master and green-slave states. This is to indicate which of the two filter dials will have a more powerful effect on the signal at that moment in time.

The intention of this is to guide you to turn the best dial without having to think about it. This sounds good on paper, but in practice it can easily cause confusion..

The problem is that you're not told which direction to turn the proposed dial to take advantage of the available frequency range. This is never obvious, and a slight turn can cause the LEDs to switch over to the other state, implying that you'd get more out of the other knob. Our instincts would take its guidance with a pinch of salt.

There's a lot to like about the Restyler - it has a different sound to the Filterbank that is both clear and musically precise. It's easy to set the controls up to do basic single band filtering, but the main thing to watch is level matching.

This filter has a lot of gain, and with the resonance turned up, it can output much louder than the dry signal. It even comes with a warning of potentially dangerous signal levels, so for safety, put a limiter next in the chain.

"This filter has a lot of gain, and with the resonance turned up, it can output much louder than the dry signal."

The Restyler has a very wide frequency range, the filter wheel is very even, and having the bigger dial makes for better physical resolution. The circuitry introduces a little bit of noise on the wet mix - this is noticeable when you cut the signal, while sweeping the master filter frequency emphasises the noise around that band. The trigger system can be quite tricky to set-up, which comes down to sensitivity.

This means that when using heavily-compressed loops or long sustained notes, there's not enough variation in the sound to take advantage of this with the AM and FM modulation. Speaking of which, the AM dials are centred at 9 o'clock, which isn't so intuitive when dealing with positive and negative modulation.

The sound is naturally clean, but there's enough headroom in the input stage to overdrive it, and more still with the three volume sliders.

Overall, the Restyler lives up to its looks, and is a good choice for simple and advanced filtering work. It suits anyone who prefers to do things by hand, and isn't looking for MIDI control, BPM sync or interfacing with a modular system. It can take a bit more time to hone in on the sweet spot when using the AM and FM, but it doesn't disappoint when you get there.