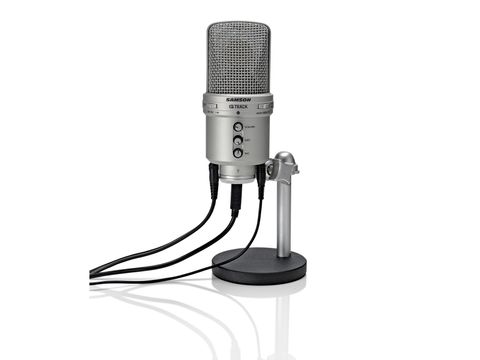 The G Track is a USB microphone and audio interface which enables you to record line level and mic signals simultaneously while also offering in-built monitoring via headphones. Remarkably, all of this functionality is built into a unit that looks, at first glance, like a humble condenser microphone.

The design is attractive and pleasingly 'unflashy', as G Track is delivered in classic 'studio grey'. However, as you'd expect for such a chameleon product, it features a few knobs and switches you wouldn't tend to find on a microphone.

Below the grille there are three dials and two switches. The dials give you control of the incoming volume (remember, this is an audio interface), plus gain adjust for the microphone and line level sources.

The incoming audio can either be a microphone plus an instrument or, if you're not singing, two line level sources, such as electric guitar and bass. All the cables you'd need for these scenarios are included, as is a table stand which mounts the microphone on any flat surface, neatly removing the need for a mic stand.

No drivers are required to run the G Track - this is a truly plug and play device.

To capture audio, simply select which mode you want via the 'Inst/Mic' or 'Line' switch, hit record and go. Once you've used the three dials on the front to tweak input and output levels they can be 'parked' by pressing, meaning they don't protrude during recording sessions.

An LED indicates the presence of USB in green and switches to red if your input levels get too hot. While you're recording, you can listen just to the returning computer audio, or a combination of this and mono/stereo live audio monitoring, via the Direct Monitor switch.

The only operational quirk we encountered was the need to 'remind' G Track that we'd set low latency within our DAW, a setting which it initially ignored. Thereafter, operation was all relatively straightforward.

The G Track is a clever piece of kit, offering everything required for a singer/songwriter recording session in the most hassle free way imaginable.

At this price, as you might expect, audio quality isn't up there with units which are dedicated to the areas G Track covers, but this isn't really the point. Here is a microphone, line level audio interface and monitoring solution from which you can capture ideas, direct to your laptop, in a trice. It responds at the speed of your creativity so for those attempting to make the hits of tomorrow in no time at all, it could be just the ticket.