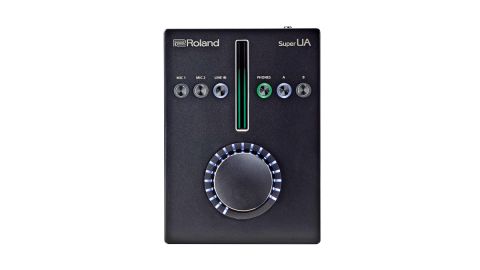 Super UA does everything you'd expect and more, and can easily hold its own alongside similar compact high-end interfaces.

The main unit is a compact desktop design and includes all the jack connectivity, micro USB connector and PSU input, along with a large volume dial, three input selectors (Mic 1, Mic 2 and Line In) and three output selectors (Phones, Line Out A and Line Out B).

Meanwhile the breakout box handles all the XLR connectors, and includes two LED phantom power indicators. Both boxes feel solid and the two unit configuration allows you to keep all your clunky XLRs away from your workspace.

Despite the four physical inputs, Super UA only handles two simultaneous input streams. However, said inputs can be configured as two mic inputs, one line and one mic, or two lines, which is reasonably flexible.

The only thing not available is a high impedance instrument input, although in use the line input handled a guitar with passive pickups well enough. The outputs can operate in two stream or six stream modes, and DSD playback is limited to two stream mode. Nevertheless, for regular PCM audio, the six stream mode provides independent control of three stereo pairs - headphones, line A (jacks) and line B (XLRs). The headphone jacks receive the same output, and both can be used simultaneously.

Super UA's volume dial adjusts whichever input or output you have selected on the panel (backlit in green), and its own white backlit scale updates to reflect the currently selected input or output level. It also has a push action for muting.

To really get inside this box you need to fire up the included UA-S10 Control Panel. Here you'll find control for obvious stuff such as input gain, phantom power, output levels and direct hardware monitoring, and also a host of further input processing that can be applied before recording.

This is available for both mic and line inputs and can be stereo linked. Options include phase invert, high-pass filter, gate and compressor, with the dynamics opening on a separate floating window. Rounding things off is an automatic input gain option.

Super UA is an extremely slick unit that delivers pristine audio alongside real-time input processing, direct hardware monitoring and high resolution playback, and with a 2-in 6-out capability is well suited to modern working methods.