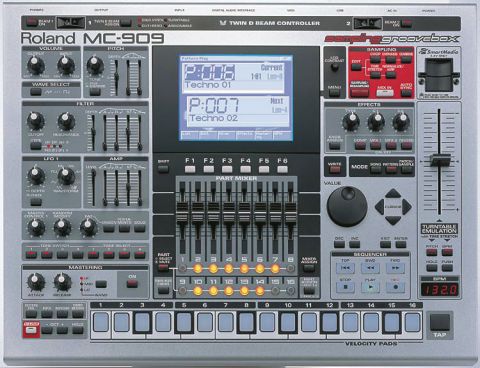 It hasn't got the control of the 909, but then it costs a lot less…

Roland's first groovebox, the MC-303, was never going to be more than a fun little box of tricks for the would-be producer who couldn´t afford the £10,000 you needed to get even a halfway semi-pro setup back in the mid-nineties.

Since those last dark days of the 20th century, technology has been advancing beyond most of our wildest dreams, and the MC-808 Sampling Groovebox, Roland´s latest, is a wholly different beast, featuring 32 parts, quality effects, sampling, extensive sequencing features, computer-based editing and even motorised faders. But Roland isn't the only company to stand on the shoulders of giants, and for the price of this latest creation you can have access to an Akai MPC or a pro-spec studio PC, a copy of Ableton Live and a selection of plug-ins - so who sees further in this brave new production world?

The MC-808´s main features are eight motorised faders and 16 drum pads (which double as keyboard keys for playing synth patches) lined up horizontally. There are some transport controls, a couple of knobs (volume and input level), jog wheel and a large number of buttons. From a performance point of view, there is also the famous D-Beam and a large tap tempo button. In case you aren´t familiar with the D-Beam, you basically wave your hand in front of it to control various real-time parameters, the idea being you can be more expressive and fun to watch.

If you´re familiar with the Roland MC-909, you´ll know the kind of sound to expect from the 808. There´s something distinctive about the sound of hardware, and with the same sonic engine inside, it´s no surprise the MC-808 and 909 sound similiar.

The unit comes supplied with a healthy number of preset patterns to choose from (256) built from the extensive library of waveforms (622) and drumkits (128), all of which highlight the potential of the unit. The genres covered are all well represented by genuine producers and artists. The sounds range from very useable to a bit dodgy, and with some notable exceptions, they sound very, well, Groovebox-like. From a programming point of view, with a couple of decades of pattern-based sequencing experience under their belts, you´d expect Roland to know how to design a nice working interface and they don´t disappoint.

If you´ve used this type of thing before, you´ll be up and running in minutes, and if not then there´s an appropriately named section in the manual (which is excellent, by the way) called ‘Creating your own pattern´. Everything´s clearly labelled, and most of the important functions are a button-press (or shift+button-press) away, such as picking a channel to play or switching from fader bank 1-8 to 9-16.

The faders too are very useful, although not quite the giant leap forward in performance that the marketing spiel would have you believe (many of the presets demonstrate the ability to record fader automation within a pattern, but without adding a great deal to the resulting sound).

In terms of sampling power, the machine is certainly no slouch (up to 512MB). There are a number of different tricks to be performed with your samples, ranging from conventional multi-sampled patch creation to an auto loop-slicing function (which maps the parts across the pads ready for reprogramming). You can set sample loop points, reverse samples, time-stretch and generally mess with your sampled audio in all the ways you´d commonly want, and all of this is made vastly simpler when used in conjunction with the editing software for PC and Mac (although it would be good if you could input values into the Editor fields on the PC´s keyboard as well as with the virtual sliders on the GUI).

So how about the negatives? Well, one thing we did notice, and checked with a variety of different cables, was that the main outputs seem to throw out an awful lot of noise. When everything´s blasting away it´s not so bad, but in quieter sections it is very noticeable.

Another serious pain in the proverbial is the fact that the LCD screen is invisible from almost anything but the narrowest of angles, so you have to be standing right over it to see anything. And then there´s the paltry 4MB of supplied sample RAM, which yields a laughable 23.5 seconds of stereo sampling at the unit´s fixed frequency of 44.1.

From a performance point of view at least, we also feel Roland really missed a trick by leaving off some type of turntable-style pitch/tempo fader of the type they put on the MC-909. They´d probably defend this by pointing out that the MC-808 is designed to be slightly more affordable, but this is why we also think that the MC-808 is a slightly curious addition to this range: it outperforms its older sibling, the MC-909, in the major raw specifications, such as sample memory and polyphony (both double), but is actually the smaller brother in terms of features and controllers. Perhaps we shouldn´t be surprised to see a slightly upgraded version of the MC-909?

In the end, though, it´s a question of vibe. If you start getting embroiled in a Groovebox spec-war you'll always be trumped by the first person to come along with a PC. And the truth is that even with all of the refinements and onscreen editing, even the current crop of super-Groovebox and Groovebox-style units cannot produce complete modern studio tracks of the type we´re used to hearing today - but that´s not what they´re for.

So, cards on the table time, should you buy an MC-808? It´s a difficult one. We really enjoyed playing with it, but we have to admit that we find Akai´s range of MPCs much more hands-on, inspirational and fun, albeit not as well equipped from a synth point of view.

If you´re a dance DJ and just want something to add to your sets you´ll have a lot of fun with the MC-808, but if you plan to do any serious production, you'll need a computer at some point too. So it starts to look a bit like an expensive novelty, and one which lacks many of the controllers of its older sibling - and if you aren´t interested in hands-on control, then you´re barking up the wrong tree getting a Groovebox anyway.

If you´re more into the sampling, groove and beats side of things then try out an Akai MPC first, as for sheer funk this gives the Groovebox a run for its money. And if you're into the synth side of things and want a good selection of controls to tweak them with, take the MC-909 for a spin, although admittedly it´s a lot more cash.

Despite this the MC-808 is a solid addition to the range. It doesn´t quite match the control features of the MC-909 or the vibe of Akai´s MPCs, but it´s no doubt going to pick up fans from all genres.