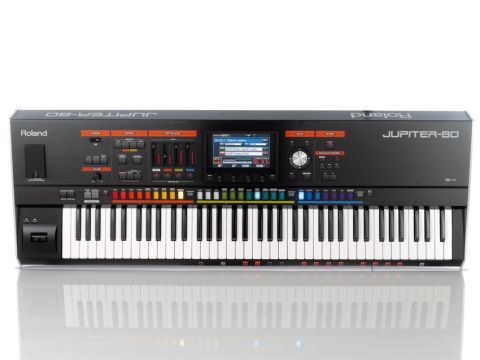 We'd love more sliders but this is expressive sonic power. It sounds amazing and inspires creativity.

OK. Let's get the obvious bit out of the way first. If you came here looking for a 2011 remake of the Jupiter 8 - the classic '80s Roland synth - then you're about to leave disappointed. This isn't the synth you're looking for.

Despite the retro paint job, despite the name (how dare they!) even a casual glimpse at the surface will reveal a disappointing lack of physical controllers and - if you look even closer - yes, that is a button marked 'Pipe Organ'…

Alarm bells ringing yet? No? OK. How about the synth engine? Analogue? At all? Just a bit? Nope. This is completely 100% digital. We think some of you might need to have a sit down.

Jupiter-80 is actually largely based on Roland's acclaimed 'Supernatural' sampling technology, which samples every key from the instrument (instead of just a few zones) for super-realistic, dynamically smooth sounds.

It also features a virtual analogue modelled synth, which Roland call a 'Supernatural Synth', featuring several virtual analogue waves, the 'Supersaw' wave which debuted on the JP-8000 (which is a staple sound for Trance producers) a noise source, plus (like the Nord Stage 2) it also has sampled PCM waves too, though you can't import your own currently.

The really clever bit of the Jupiter-80 is it's 'Behaviour Modelling Technology' which captures the performance nuances of particular instruments, analyses your actual playing performance in real-time and then melds these characteristics with the Supernatural samples to add a greater breadth of expression to sounds.

For example, if you play a sax sample, as you press harder on the keys you can add more growl, while it'll also subtly change in tone, much as would happen when blowing harder on a real sax.

On a violin or cello sound, as you lean into the aftertouch keybed, you'll find that the dynamics smoothly change and a very natural vibrato fades in. It's certainly no marketing gimmick and the results are truly stunning.

Without doubt, the strings, brass and woodwinds (solo and ensemble) are the most realistic and expressive we've ever had the pleasure of playing in a keyboard.

Instead of making 'a 2011 analogue monster' Roland has taken the original JP-8s heritage as a boundary-pushing live synth and ran with it. Jupiter was where Roland put their latest technology and the same holds true with the 80.

The case and controls (which are obviously designed to hark back to the Jupiter-8) feel very high quality (which is what you would expect on flagship pushing-£3,000 instrument) and the 76-note, synth-action semi-weighted keyboard, is great, though it's a shame there's no weighted option. The acoustic and electric pianos, plus many of the other acoustic sounds would benefit from being played via a weighted keyboard.

Controller-wise, the Jupiter-80 is pretty sparse for a performance instrument and this is its biggest downfall. There's the usual pitch/mod wheel, four volume part sliders/switches, the D-Beam (for hands-off expression) plus four assignable dials under the screen that are preset to control filter cutoff (for the upper and lower parts) and for controlling the 'tone blender' function, that allows you to control multiple parameters via one dial (which is a godsend).

It's a real shame that this basic interface lets the Jupiter-80 down, as it really is a super-powerful synth and thus it would have really benefited (like the Jupiter-8) from dedicated hardware controls for envelopes, filters and effects - why just a reverb and rotary on/off?

We would have been much happier with a tiny screen and a full compliment of analogue-style sliders, dials and switches (like the JD-800 or JP-8000) and this would have made many people take it much more seriously as a Jupiter-8 successor.

The colour screen is large and the fonts are easy to read compared with the Korg Kronos but it would have been nice to have a monitor screen output, plus it's not yet apparent whether or not there's going to be a software editor to aid with patch making.

Also, some of the on-screen boxes are a little awkward to select with your finger as they are just that bit narrow.

What is good here (unlike the Kronos) is that if you select a parameter on screen you can simply drag the selected control to change its value (whether it's a slider or dial). Plus if you select and hold a parameter and turn one of the four under-screen dials, that parameter becomes assigned to the dial.

Roland in the deep

Now let's examine the sound structure as it's initially pretty confusing. The main element in a Jupiter-80 sound is a 'tone'. This can be a 'Supernatural Acoustic' tone or a 'Supernatural Synth' tone.

Up to four tones (acoustic or synth) can be layered to form a 'live set' (which includes envelopes, filters, offsets etc.) and up to two live sets can be used together in what's called a 'registration'.

This registration contains a snapshot of performance related settings such as splits, layers, note ranges, arpeggiator settings, pedal control assignments and more, plus it includes 'upper' 'lower' 'percussion' and 'solo' parts which all have dedicated front panel volume sliders/switches and to which you assign the live sets. This gives you a total of 10 separate tones to split and layer per registration.

Thankfully, the Jupiter-80 also has 256-note polyphony to accommodate this huge sound engine and sonically, a 10-tone stack can sound massive. Also note that you can assign any type of tone to the percussion or solo parts too, not just monophonic parts.

There are also some very nice percussion, FX and drum kits available, accessed from the drum/SFX and manual percussion buttons on the front panel.

The synth section is one of the punchiest and most versatile VAs available. A 'Supernatural Synth' tone consists of three 'partials' (oscillators) with two LFOs per partial, ring mod and a powerful multi-mode filter with selectable 12 or 24dB slopes.

It's a brilliant synth, though the filter does step a little with fast cutoff changes. When you consider you can have two 'Supernatural Synth' based live sets (with four 'Supernatural Synth' tones in each) plus another synth tone on the percussion and solo parts, if you combined them all, you could have a humongous 28-oscillator synth running (depending on the processor and polyphony of course).

The PCM samples in the synth cover most of the bread and butter sounds that you'd expect (more pianos, strings, guitars and effects) plus sampled synth tones.

For live performance, it's easy to change registrations/banks/sets using the Jupiter-4-style buttons under the keyboard and there's a 'lock switch' option to stop you inadvertently changing sounds if you brush them with your body or fingers, which is actually quite easy to do.

Finally, the multi-coloured Jupiter-8-style switches provide quick access to several categories of sounds (to which you can also assign your favourites) giving you instant access to all the sounds you could want for live performance.

However, the lack of hands-on editing controls is again a persistent disappointment.

The sound department is where the Jupiter-80 really pulls its punches. If, when you think of the original Jupiter-8, you call to mind the definitive synth string sound of '80s Pop, a huge array of modulation and creative sound design control with analogue at its heart, you won't enjoy the sound of the Jupiter-80.

However, if, when you recall the 8, you remember big, bold, brash, powerful, flexible and impressive sounds, then for you, the Jupiter-80 will be a logical and modern step forward from that.

The 'Supernatural Acoustic' tones are superb (as we mentioned earlier) and if you're careful how you layer and play them, they could almost pass for the real thing. They respond smoothly and authentically and this really is as close as you can get to playing the real instruments but on a keyboard.

The acoustic pianos are excellent (there's a sympathetic resonance effect too) the electric pianos sound warm and deep (especially when paired with the also excellent cabinet models, phasers, delays and wahs) while the acoustic guitars, basses and electric guitars offer up a whole new level of expressiveness that we haven't experienced on any other instrument.

Play legato on the acoustic guitar or electric bass and you get realistic slides, play harder and you get pops and slaps and string noise, plus (for example) you can assign a mute bass to one of the 'S1' or 'S2' switches to quickly move to a muted style.

To our ears, the on-board tonewheel organ sounds much like the Roland VK8 and in edit mode you get on-screen drawbars and percussion controls, though we wish these came up on the screen by default when selecting the tonewheel organ preset.

There's also a very good 'VK Rotary' effect too that can be switched on and off directly from the front panel, though it's too easy to knock when switching rotary speed.

Also, in this early software version the 'scanner' vibrato and chorus (which is a major part of a tonewheel organ's sound) is conspicuously missing, so let's hope Roland can add this in a software update as soon as possible.

The Jupiter-80 is therefore a conundrum. Once you get to grips with its confusing sound structure and sparse interface (and get over the non-analogue shock) there is actually very little to fault.

Even if you treat its acoustic tones - which are the most expressive and true-to-life we've played - as a bonus, the Jupiter-80 is still a sonically versatile, impressive and supremely powerful synth.