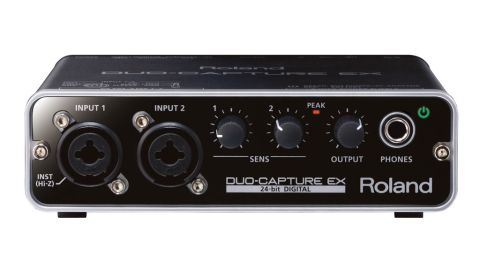 It faces plenty of competition, but thanks to its robust build, good sound and iPad compatibility, the Duo-Capture is an interface we'd happily recommend

As a compact and relatively affordable 2-in/2-out audio interface, Roland's Duo-Capture EX exists in one of the most crowded corners of the hi-tech music making market. Consequentially, it packs a feature set that's a little hard to differentiate from the broad range of vaguely similar products already out there.

That said, whilst it might not seem like the most unique product on the market, its credentials as an interface are hard to fault. It provides two high-quality VS preamps, which are the same those installed in Roland's more expensive Quad-Capture and Octa-Capture interfaces. Its inputs, meanwhile, accommodate both XLR and 1/4-inch jack connections, with phantom power available via the XLRs and a Hi-Z setting on Input 1 for directly connecting a guitar or bass.

Around the back there are balanced 1/4-inch jack outputs and MIDI in and out ports. There's also a front panel headphone output, with independent volume control. The unit boasts a sturdy-feeling build quality too, with the whole thing housed in a robust-looking aluminium case.

If the Duo-Capture does have a USP, it lies in the fact that it can be powered via USB, AA batteries or AC adapter - although the latter must be purchased separately. As such, the unit is able to function as a class-compliant interface for iPad via Apple's Camera Connection Kit, making it a great option for on-the-go recording when combined with apps such as GarageBand or Auria.

While, broadly speaking, the Duo-Capture faces plenty of competition from other roughly similar products, it certainly offers very good sound and build quality for its price. It's difficult to say which single 2-in/2-out interface is going to be best for any particular musician's recording setup, but if you think the Duo-Capture is going to suit your needs, we certainly have no qualms about recommending it.