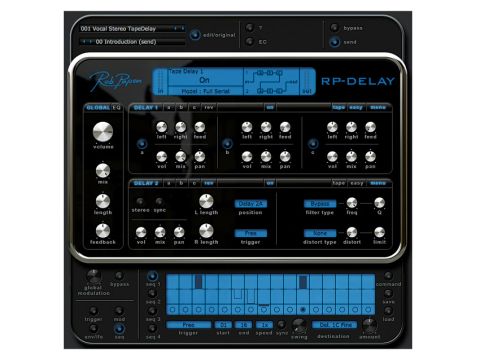 A thoroughly modern delay plug-in with a great sound and a feature set that's arguably unmatched.

Rob Papen is renowned as a skilled purveyor of floor-shaking, spine-tingling synths. Electro, trance, dubstep, fidget, DnB, pop - you name it, his synths are the go-to for many a top producer.

But a little while ago he dropped a processing bomb on us with RP-Verb, a crafty take on a studio staple - we loved it. It's taken him a while to get around to this next one, but what do you expect from a delay?

With RP-Delay, you get two delay 'sets', which can be run in sequence, in parallel, or with your choice of cross-feed. Within each of these sets are three independent delay units (arranged in series), complete with the usual assortment of lengths, pans and levels.

It doesn't stop there, as you can set filters and distortion for each. As well as convenient 6dB/oct high-pass and low-pass knobs, there's a multimode filter (including a vowel mode), and the distortion is also well equipped, with a few types to select from, a limiter, and the option to place the distortion in the delay feedback loop.

Each delay unit can be set to different delay times for the left and right channels. There's a tape delay mode - engage this and you can changed the delay time without any abrupt clicks, just as you would by changing the speed of the tape in a tape-delay unit. It's a live performer's dream, and ideal for automating.

Naturally, all of these delays can be set in milliseconds or synced to your project tempo. Managing six delay units could be confusing, but it's all simplified by nine configuration modes.

These give you certain delay units in preset routings, so, for example, Mono mode gives you a single delay unit to play with; Stereo offers independent left and right delays; Dual Stereo enables both delay sets, but only the first delay unit of each; while Serial Multi enables all six delay units, routed in series.

There are more modes, but all you need to know is that RP-Delay is as simple or as complex as you need it to be.

Here's the best bit, though: an unassuming little button labelled Rev on each delay set, which enables its Reverser module. This records a chunk of the incoming signal (up to four seconds, or half a bar in sync mode) and then plays it backwards.

Placed on a channel, this can add a great sucking effect, pad out a riff, add syncopated percussion-style touches to the part of your choice or simply make a less intrusive version of regular delay. And on your master bus, it becomes an almighty mix-mangling monster, preserving the original signal (if you want) while bringing reversed delays in and out.

Whether synced to the project tempo or set manually in milliseconds, it's one of the most obviously useful and consistently jaw-dropping features we've played with in a long time, and the standout feature of RP-Delay.

Back to back… to back

As with all such 'reverser' plug-ins, there is one inescapable limitation: whenever you reverse the signal, it will be delayed according to the length you set the reverse buffer to. That's because if you want to reverse, say, one second of audio, the plug-in has to record that much audio before it can start playing it backwards.

The only way around this would be for the plug-in to predict the future (not so practical) or fake that using lookahead, which would introduce an equivalent amount of latency to the entire track (which would be highly undesirable).

If you do want to give the illusion of 'real time' reversing, you could fake it by duplicating the track you want to reverse and applying RP-Delay (in Send mode) to the new track.

Finally, we come to the multi-function panel at the bottom of the interface. Here you'll find envelopes, LFOs and step-sequencers - you get four apiece, each with its own destination slot.

The sequencer has up to 16 steps and even a swing function. In addition, there are four MIDI 'trigger' event generators (when the CC is 63 or higher, the trigger is engaged), and one that's triggered by the signal exceeding a threshold. There's also a straight-up envelope follower.

Finally, there's the eight-slot 'modulator' panel for routing modulation sources to destinations. Whether assigning a trigger to a MIDI controller and using it to retrigger an LFO, or firing off sequencer messages to control a delay, the sheer power on offer can be overwhelming.

Our advice is to simply add a preset to a channel, flick through the windows and try out each one. In reality, this is a gentle giant of a plug-in - it seems intimidating until you get to know it and realise how friendly it is.

On-screen parameters can be quickly latched to a MIDI controller - especially useful for live use - including the aforementioned tape delay mode for smooth length-changing.

So, are there any problems? Not many, in fact - we really do have to nit-pick to find them. Firstly, like RP-Verb, the interface colour scheme can be a little difficult to make out on some displays. And the knobs don't offer pop-up value readouts, so you have to keep looking back to the main LCD-style display to see the values.

Then there's the issue of the plug-in always starting up in Send mode - ie, 100% wet. Every time we want to use the delay as an insert (which, with something as universally applicable as RP-Delay, is often), we have to turn it off. But that's about it.

This is, without doubt, one of the best delays we've used, and one of the best third-party plug-ins we've seen for live performance. It's perfect for edits, special effects, thickening vocals, making basslines from a single sound and so many more things that it would take pages to list them all.

The price is also quite stupendous - we thought it was a typo at first, as we were expecting it to cost around the same as RP-Verb, which is £125. RP-Verb owners needn't feel put out, though, because RP-Delay is a free download for them.

Everyone else, though, should beg, borrow or steal £42 for RP-Delay, and kick off the New Year knowing that they likely won't make a better investment in 2011!