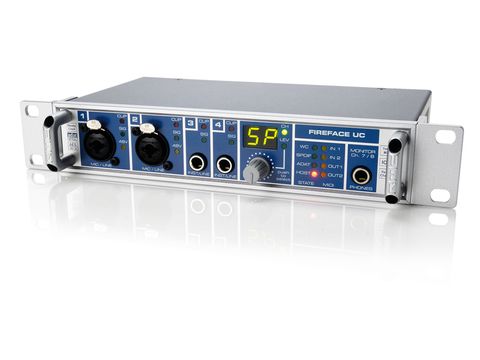 A great quality interface with superb features and reliability at a reasonable price.

The Fireface UC is ostensibly the same as RME's Fireface 400, providing 36 channels of analogue and digital I/O with only the interface format changed from FireWire to USB 2.0.

The analogue inputs are split across the unit with two mic/line and two instrument/line sockets at the front and the remaining four at the rear on balanced TRS sockets.

Six of the analogue outputs appear as TRS sockets, which can be used for feeding a 5.1 surround system, while at the front is a single TRS socket for either headphone monitoring or an unbalanced stereo monitor path.

There is a single knob and two-digit LED display on the front of the unit that enables control of all output levels (analogue and digital) as well as the four front input gains. The driver interface has a dedicated page for control of the analogue I/O with gain faders, pad switches, phantom power for the mic inputs and impedance switching for the instrument/line inputs.

Also on this page are settings for the overall gain structure of the analogue inputs, TRS outputs and headphone outputs. There are three ranges: 10dBV (unbalanced), +4dBu (balanced) and a Hi Gain (outputs) or Lo Gain (inputs) which offers more headroom for those who work with high-gain level balanced outboard. This is a unique function that really enhances the interconnection flexibility of the unit.

The AD and DA conversion is 24-bit and sounds great, particularly thanks to the almost jitter-free RME SteadyClock system. Obviously, you can get more esoteric or high-end converters, but for a soundcard interface, this is excellent quality.

The mic preamps also perform well - 65dB of gain is available and there's very little noise, a wide frequency response range and a clear, uncoloured sound. The instrument inputs are also quiet (with a flat frequency response) and have plenty of gain.

The digital I/O, like the analogue AD/DA, runs up to a sampling rate of 192kHz. The single ADAT input and output can be used at the high rates via the double and quad speed SMUX, but this of course halves and quarters the channel count on ADAT.

The driver interface page contains a host of digital clocking options with plenty of feedback on the sync status, which is also featured on the unit's front-panel LED section along with MIDI activity.

A unique feature is a pitch adjustment control allowing +/- 5% on the sample rate when the Fireface UC is the master clock. Though implemented for professional video applications, this also works for matching tunings or altering timbres when recording. This is a fantastic feature and enables some cool drum, vocal and guitar tricks.

"The AD and DA conversion is 24-bit and sounds great, particularly thanks to the almost jitter-free RME SteadyClock system."

Like all RME interfaces, there is a mixer application (TotalMix) which allows for the most flexible zero latency signal routing on the market with controls for talkback, multiple monitor paths, M/S processing, muting, soloing, level adjustments and mixer setup loading/ saving.

On top of this is the excellent DigiCheck application that offers a host of flexible and highly professional monitoring tools, from super-accurate peak/RMS metering to phase vector scopes and frequency analysers.

Operating at the lowest latency (48 samples or around 1ms), glitching didn't occur until around 30 plug-ins had been loaded across 16 stereo channels, and at moderate latencies (256 samples and above) the plug-in and track count went well beyond the demands of our most intensive mixes.

We know many engineers who spend countless hours (which equates to lost revenue) trying to iron out compatibility issues with their interfaces. If one was to add up the cost of these lost hours, the price difference between the Fireface UC and an alternative (cheaper) product disappears and in fact reverses.

We would heartily recommend this unit to anyone looking to buy a non-FireWire interface.