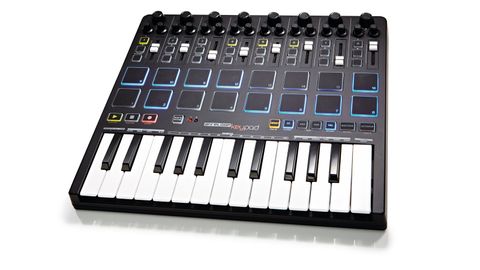 Of all the controllers we've seen, Reloop's Keypad is one that most brings to mind a pizza box! There's rationality behind the design, though.

The Keypad's aimed directly at users of Ableton Live's Session View, and the layout reflects that. The Keypad has a 25-key, velocity-sensitive keyboard, with buttons for octave up/down, and transport control, as well as 16 drum pads, while the rest of the surface is laid out in a typical eight-channel format, with faders, mute/solo/record buttons, send knobs, and a large pan knob at the top of each channel.

After connecting the Keypad, launch Live and select Keypad from the Control Surfaces list in MIDI preferences; then it takes over mixer and transport functions, tempo nudge, markers, and recording.

The scene buttons let you navigate left/right through banks of eight tracks at a time. Push the pan button at the top of any mixer channel strip to select that track, and the drum pads will play drum racks in that track.

The small buttons above and to the right of the keyboard access more interesting features. The CC button lets the drum pads send CCs instead of notes. Next to that is the Sus button, which sends sustain messages, and the Vel button, which fixes the keyboard's velocity at a value of 127.

These two buttons also control the arpeggiator: press Shift then Arp to activate it, and Sus to latch it. Press Shift and one of the labelled note value keys to change note divisions for the arpeggiator steps, or to choose from some basic pattern presets.

Use the Vel button as a tap tempo. Shift/Chord makes each key play a chord instead of a single note; then use the octave keys to change octaves. Each octave plays the same pitches, but with different chords, for example C1-B1 plays minor 6, and C5-B5 plays major 7. You can also transpose the entire keyboard in semi tones.

The Keypad layout is logical and perfect for Live. The lack of pitch and mod wheels detracts from the keyboard experience a little bit, but this isn't really a player's keyboard anyway.

On a more negative note, we were disappointed in the build quality; it feels cheap, and the faders are horrible - although to be fair, it is cheap! The Keypad doesn't offer much in the way of clip or scene launching facilities, but you could always assign the pads or keys to those tasks, or pair it with an iPad or Launchpad, to create a set-up that covers all the bases. Anybody who works with Live's Session View, and needs a mixer-type interface, will like this.