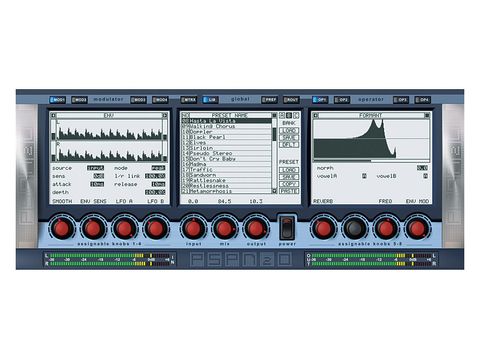 A great update of a classic effect, N2O is yet further evidence to support the theory that you can't go wrong with PSP plug-ins.

Released in 2004, PSP Nitro is one of the forgotten heroes of the filtering world. Based around a series of four modulators that could each control your choice of operators (fancy filters and phasers), it could conjure up absolutely mental sounds.

But despite its simple premise and intuitive layout, many overlooked it. Considering how good it still is, it's a crime that it hasn't attained universal classic status.

2011 sees the arrival of its revised, supercharged successor, N2O. Still based on four modulators, the number of types has increased. You now get a 16-step sequencer, an LFO, a signal-following envelope and a level-triggered ADSR, each pretty powerful, even extending to independent controls for left and right channels.

Words can't quite describe how having four connected but independently modulated effects of stunning quality can mangle and enhance an audio signal. But we'll give it a go anyway: 'brilliant' and 'awesome' fit the bill.

One thing we should make clear is that anybody seeking analogue-style warmth should look elsewhere or use N2O in conjunction with some other source of heat (such as PSP's excellent VintageWarmer2). The sound is decidedly digital and clinical, even when it's making stuff sound brilliantly bonkers.

The same goes for an increasing number of creative plug-ins these days - and indeed the production aesthetic of most current popular genres - so that's in no way a criticism.

This much processing can wreak havoc on signal levels, but N2O has that covered with input and output monitoring, plus an output limiter based on algorithms from PSP's superb Xenon mastering limiter.

The last major feature of N2O is its assignable knobs. In addition to the Wet/Dry control (essential for live modulation), there are eight configurable knobs, which can be routed to just about any parameter you like (or more than one). These can in turn be bound to MIDI controllers, making it an incredible live performance proposition.

What else do we need to know? Well, the most important thing is the sheer range of effects you can achieve, making N2O useful for countless applications. If you have a musical part that lacks bite, presence or character, there's something here for you.

If you want to add a creative rhythmic effect like gating, look no further. If your vocal isn't cutting through the mix - again, N2O has your back. And if you want some real-time mix-processing mayhem, then it'll sit beautifully on the master output.

One of the most spectacular things about N2O is the sheer power that it offers in terms of modulation and routing.

The central modulation matrix will be familiar to most of us. The idea is simple - set your modulation source and destination on each row - but seeing something on this scale outside of a soft synth is pretty unusual.

Put simply, almost anything can be routed to anything else, and multiple destinations are a possibility. Furthermore, the Envelope Detector modulators themselves can take their input from a variety of sources, rather than just the plug-in's input. This includes directly from other operators or even an external sidechain input.

Finally, there's the Routing section, which enables you to control the signal path running through N2O. At first glance it can be a tad intimidating, but it comes with a bunch of preset routings to get you started.

As well as feeding each operator into any of the subsequent operators (or straight to the output) in any amount you like, you can also feed an operator back to itself or any lower-numbered one.

There are also mid/side and polarity inversion options tucked away in the Configuration sub-panel. Phew!

There are very few people to whom we wouldn't recommend N2O. Even rockers with a fetish for guitar pedals will be blown away by the combinations and power on offer, and their producers will savour the modulation options. Hip-hop heads will love what it can do to basslines and samples, and dance freaks will leap at the chance to mash up their breakdowns.

N2O is, crucially, also perfect for novices and hardcore programmers alike. The dizzying number of routing combinations can make your head spin, but the large and exquisitely well designed preset collection makes N2O fun for all.

If you're very much into the meat and potatoes aspects of production, it won't be such a boon; but we suspect that if you give it a chance, you'll find N2O influencing your productions for the better.

If we have a criticism, it's that the GUI is a little stingy size-wise, considering how much information is packed in. It continues the PSP tradition of imitating old school hardware interfaces, in this case the monochrome LCD screens of '80s and '90s digital hardware. Some love this; some hate it.

We think a more modern interface would make it even more friendly and less fiddly, but it certainly doesn't put us off. It should also be said that none of the individual effects modules are entirely groundbreaking (none claim to be), so don't expect a whole new paradigm in sonics.

N2O is almost the perfect update. It builds on its predecessor's feature-set, heavily refines the interface, comes packed to the gills with a variety of diverse, demonstrative presets, and is hugely versatile, offering something for almost anyone.

Whether placed on a vocal to spice things up, a guitar to distort it, a synth pad to create a choppy riff or simply the master output to get some global glitching on the go, N2O will bubble up to near the top of your list of go-to plug-ins.

It's got the ability to be either an overtly creative effect or a stylish but functional one - and that makes it not just a pretty smart buy, but one you'll really get your money's worth from.

Now listen to our audio demos to hear N2O in action:

Lucy In The Sky