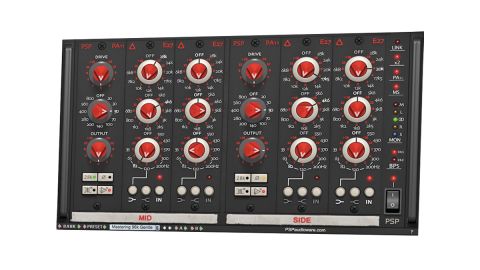 A stunning and versatile mixing and mastering EQ that rewards the time spent learning its old-school workflow many times over.

PSP Audioware is one of the most respected names in plugin development, with a string of acclaimed mixing tools under its belt.

It specialises in vintage-style effects, but, until recently, it had been a full 14 years since it officially modelled any classic hardware (the Lexicon 42 delay, fact fans). Now, hot on the heels of the PSP 2445 reverb, an unofficial interpretation of EMT's classic 244 and 245, PSP has unleashed a direct emulation of Avedis Audio Electronics' acclaimed E27 EQ, endorsed by Avedis to boot.

The E27 (VST/AU/AAX/RTAS) is similar in general concept to the classic API 550 EQs. Like that hardware, it uses concentric dials to step between a range of preset frequencies and set the gain for each band, and proportional Q, which progressively narrows the resonance as the gain setting is raised.

By default, E27 is a three-band EQ. The top band's nine preset frequencies range from 6-28kHz; the mid frequencies span nine values from 680Hz to 5.6kHz, and the bottom band offers nine frequencies from 33-550Hz.

The top and bottom bands can be switched between bell and shelf operation, and the gain range for all bands covers a healthy +/-16dB. Crucially, in an obviously radical departure from the hardware original, the x2 button calls up a second, identical set of bands, for a total of six.

The frequency settings are based on useful values for a variety of instrumentation, the goal being to deliver smooth, musical results, whether you're softening the harsher frequencies of a guitar, boosting the harmonics of a vocal, or adding weight to a kick drum. E27 is also suitable as a mastering EQ.

While the main controls might appear simple and limited, E27 is surprisingly surgical (thanks to the proportional Q), and just makes whatever you put through it sound a little bit special. Although the highest frequency selection is way above the audible range at 28kHz, the shape of the curve tailing back down creates top-end brightening so smooth that many dedicated exciters and brighteners would be envious.

Indeed, even without applying any EQ boost or cut, by default the plugin models the E27 hardware's circuits, adding a very subtle but pleasing quality - particularly on live recordings - and helping create mix separation.

All this is impressive enough as it is, but pushing the PA11 button expands the GUI to reveal the optional 'PA11' preamp module.

This features a Drive dial (the effect of which is surprisingly subtle, making it useful for mastering and precision mixing), a low-cut filter with 11 frequency settings from 20-800Hz, and the option to bypass the distortion of the filters and the PA section's modelled transformer, enabling the plugin to be used without any saturation if you prefer.

The 28k button, meanwhile, engages a bell boost at that frequency, extending down into the audible range, and adding a really nice top-end sheen with no harshness.

We'd quite enjoy a larger GUI but that's easy to overlook, as E27 is one of the sweetest, most punchy EQ plugins we've heard - very few native options come close.