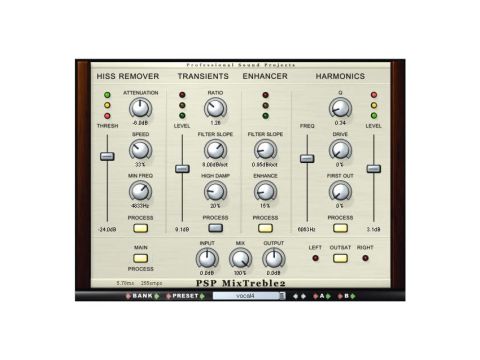 MixPack2 is a superb collection of mixing tools, offering first-rate sound quality and a refreshing alternative to the standard EQ-and-compression combo.

Rather than releasing classic high-end kit emulations, PSP Audioware's philosophy is to deliver brand new effects that are loosely modelled on a wide range of vintage equipment. As such, they offer the general characteristics that are so often associated with classic gear, but don't attempt to clone a specific sound.

Things have changed a lot since PSP released its original MixPack eight years ago, and v2 reflects this. There are overhauled interfaces throughout and revised processing algorithms.

You might expect a bundle of mixing processors like this to include stereotypical dynamics and EQ plug-ins, but PSP has assigned these tasks to no less than five units: MixBass2, MixTreble2, MixPressor2, MixSaturator2 and the all-new-for-v2 MixGate2.

The first of two effects aimed at treating dynamics, MixPressor2 is a very advanced compressor sporting the simplest possible controls. Central to the beast is the Compress knob, which takes the place of conventional threshold and ratio dials. As an interesting evolution of the basic compressor envelope settings, MixPressor2 adds a Hold knob to go with the Attack and Release functions, for even greater control over timing.

There's also a lookahead toggle, adjustable knee, and RMS/ peak modes. The sidechain can be configured to accept an external source and includes a filter that helps it to zone in on selected frequencies.

The second dynamic effect is the all-new MixGate2 noise gate. This thing is faster than the Batmobile - we're talking sharp! In addition to being an automatic gate - achieved by setting the threshold, filters and envelopes to do the hard work for you - MixGate2 boasts manual Open and Close buttons that can be used to tap out or automate your own gate patterns.

You'd probably expect to find saturation as part of any advanced dynamic processor's feature set, and while several of MixPack2's plug-ins do sport Saturation switches, PSP offers a more comprehensive solution in the form of MixSaturator2. This emulates the sound of valve circuits and analogue tape exceptionally well, and enables you to tune the low and high ends separately.

MixBass2 is something of a gem. Essentially, it's designed to help create the impression of punchy, 'analogue' bass. It works very well on a wide range of material, boosting the perceived level of bass without employing conventional EQ.

Instead, there's a targeted Compress section, a Character strip for adding upper harmonics that can bring clarity and definition to certain types of bass, and a Punch module that dynamically filters a chosen area in the mid-range in accordance with what's happening at the bottom end. It becomes apparent how such a plug-in can be vital to your mixing technique, and PSP seem to have designed MixBass2 well aware of the fact that low frequencies munch headroom like nothing else.

MixTreble2 is like a Swiss army knife for your top end. It seems that PSP has thought of everything you're likely to need for enhancing, fine-tuning or even restoring the treble in your material - and it all sounds gorgeous, frankly.

You get a dedicated, intelligent hiss remover, a Transients section (which can repair damaged transients or merely improve the transient content) an Enhancer section and a Harmonics section. Here, you use the Freq and Q controls to designate a frequency zone, and then push the Drive dial to generate sizzling harmonics.

These plug-ins sound very musical. PSP's VintageWarmer (not included) is universally hailed as one of the few truly 'warm' plug-ins available, and MixPack2 offers that same desterilising quality but gives you many more ways in which to apply it. There's a sense when working with these effects that any harsh digital edge is gently being cleaned off your material, while real depth and character is being added.

As well as sounding fantastic, MixPack2 is also quick and easy to get going with, which can make all the difference in real-world situations. At this price, there really can be no complaining.

Listen to a drum loop being played dry, and then with MixPressor2 supplying parallel compression:

The next clip is a dry square bassline. The final one is the same sound but with MixSaturator2 and MixBass2 doing their stuff: