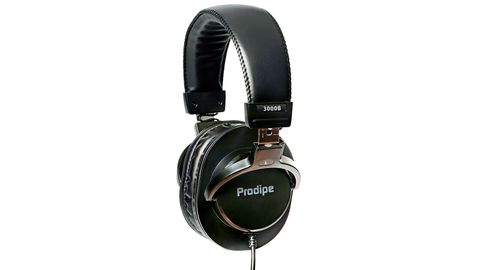 Though you wouldn't want to rely on them for mixing, the 3000 Series are ideal for monitoring.

French manufacturer Prodipe has released a new range of headphones, the 3000 series.

Claimed to be do-it-all cans that you can feel comfortable wearing in the studio and on the street, the 3000 series come in a variety of colours, including all black, super-pimping white and a black/red affair, which look like the least desirable.

They are 32 ohm, with a none too shabby frequency response of 15Hz-22kHz, and 40mm drivers.

The styling is pretty standard and, whilst you wouldn't mind wearing them out and about, they don't feature a removable cable and won't fold down into a bag-friendly shape either.

We wouldn't trust them for mixing duties due to a lack in presence and they seem a bit heavy in the mid-range, but we found them perfect for general monitoring duties.