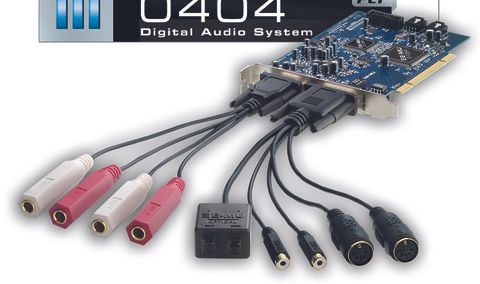 Ideal for beginners, and as a low-cost portable option for more experienced musicians.

In recent years US manufacturer PreSonus has been busy neatly shoehorning its high-quality mic preamps into an ever-shrinking series of FireWire interfaces.

The Inspire 1394 is the result of this reductionist rationale and is the company's first to be controlled entirely from within a dedicated software environment.

Accordingly, there's a complete absence of physical controls - inputs on the front, outputs on the back and that's your lot in the real world.

This takes a bit of getting used to, but at least it means that the price point for a pro-quality FireWire audio device is now £150. If you're happy using solely software control, the Inspire has much to offer.

Out of the box you get the Inspire itself, the Control Panel CD, further CDs for the software bundle (Cubase LE 1.08, ACID XMC, Diskwelder Bronze, plug-ins from Audio Damage, Pluggo Jr/Cycling 74, Voxengo and Camel Audio, dozens of Discrete Drums loops, 100 ACID loops and 100 KeyFax Twiddly bits), along with a decent-length FireWire cable, the power supply and the warranty card.
At first glance, the Inspire doesn't look, well, very inspiring. It looks more like a network device - a sturdy chunk of aluminium surrounded on all sides by thick blue-grey plastic.

It's not as attractive as previous PreSonus products, but at least the Control Panel software - where all the attendant tweaking is done - is much better looking.

In this virtual world there are separate volume controls for inputs 1 and 2, a joint control for inputs 3 and 4 (which can be linked or separate) and one for headphone volume.

There are also buttons to switch on phantom power and the built-in limiting function for inputs 1 and 2, a Boost button to add +20dB to the preamp's level and a button to engage the phono inputs for 3 and 4.

There's also a four-track mixer, where incoming levels and panning can be set, along with master controls for playback, speaker output and global mute.

Other functions controlled via software are the sample rate, the latency, the loading and saving of mixer settings and a selection of a particular Inspire unit, as up to four Inspires can be linked to create a multi-channel set-up.

The Control Panel can also be neatly compacted to display just the core control functions and set to float on top of all other windows.

The physical inputs and outputs of the Inspire are standard fare: two XLR sockets and two instrument jacks on the front, along with a sync light to indicate whether or not the Inspire is locked to your computer's digital clock (blue is good, red is bad).

Around the back, there are two further inputs on RCA jacks and two RCA outputs for your monitors, along with a 1/8" jack for computer speakers.

Finally, there's a 1/8" headphone jack, two FireWire sockets and the jack for the (included) power supply.

Operating any virtual equipment using a mouse is never ideal, but at least in this case you'll usually only be setting a level, then recording - it's a lot less complicated than manipulating a VSTi synth's ADSR envelope, for instance.

That said, there's currently no support for assigning MIDI control messages to the various Control Panel functions. Given the huge range of control surface products available now, this would be a useful addition in a future software update.

Direct, zero-latency monitoring is taken care of by the mixer section, whereby you can balance your live input with tracks playing back from the sequencer (the level of which is adjusted using the Playback fader).

I recorded the usual suspects with the Inspire: bass, acoustic guitar, DI electric guitar, miced guitar amps and vocals, using dynamic and condenser mics, all tracked through the Inspire's preamps.

Everything sounded good - there's definitely no low-budget feel about the quality of the preamps or the A/D converters, particularly at 24-bit/96KHz.

There's a lot to like about the Inspire - for starters, it's cheap and well-specified. It offers a good selection of common I/O requirements, plus a little of the unexpected, such as the RCA phono input.

The Control Panel software provides access to every function in a single, intelligently designed window. It has two FireWire ports and two speaker outputs.

It does, however, have its drawbacks. There are no physical controls, so everything has to be done in software. You can't currently assign these software parameters to a MIDI control surface.

There's also no digital I/O. The headphone socket is inconveniently located at the back of the unit and it's only an 1/8" socket, not 1/4". There are no signal level lights on the unit, so all visual checks have to be done using the Control Panel, and it only offers stereo out - there's no surround-sound capability.

All that said, it's quite likely that such quibbles won't apply to the Inspire's target market. For any musician looking to buy their first FireWire audio interface, they could do a lot worse.

The hardware provides very respectable audio quality, and the software bundle is a useful assortment of loops and tools.

While it's fair to say that spending another £100 would get you a more fully-featured interface, for £150 the Inspire is a worthy introduction to the world of recording.