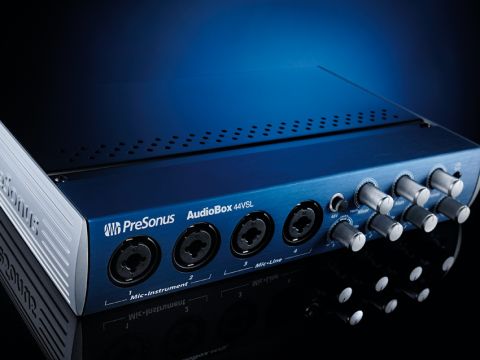 A very practical compact audio interface: a great starter pack for the beginner or a worthwhile upgrade from a basic two in/two out interface if you want to expand your facilities.

Presonus's latest generation of AudioBox interfaces now sports the VSL suffix, this 44VSL model being the middle unit in a range of three models.

VSL stands for Virtual StudioLive and features integrated software that enables you to apply effects and processing to your monitoring sends when recording - a typical use being to give a singer a touch of compression and reverb in the headphones to enhance their performance.

"It's not just about recording - in a small set-up you could gig without a hardware mixer and effects rack, just a laptop and the 44VSL."

The 44VSL is a smart looking unit with its four inputs conveniently located on the front panel. These are XLR/jack combi sockets, all capable of taking a mic signal - two are set up for instrument-level input direct from a guitar, two for line-level input. All four have associated gain knobs on the front panel and phantom power can be switched globally for connected microphones.

Other knobs on the front control the volumes from the rear panel headphone output and the main left and right outputs, which are intended to feed a studio speaker system. Four standard jack outputs on the rear panel can feed a signal to any external devices, such as a headphone amp for monitoring during recording.

As a straightforward audio interface, the 44VSL provides a decent-sounding set of preamps and will get audio effortlessly in and out of your DAW with the mixer knob enabling you to set the balance between your latency-free analogue input signal and the playback from your DAW.

Monitoring this way may be fine in some situations but if you want to hear a more sophisticated sound that may help you sing or play better, then it's time to take advantage of the VSL software with all of the mixing done digitally in your computer, implemented by Presonus in a way that creates less latency than just applying plug-ins in your DAW.

The VSL software, once installed, takes the form of a virtual mixer with four input channels, four returns from your DAW, main outputs, outputs three or four and two effects sends/returns. These are based on the Presonus StudioLive 16.0.2 and offer the same processing features - notably the Fat Channel with high-pass filter, gate, compressor/limiter and three-band semi-parametric EQ plus a choice of reverbs and delays for the two effects buses.

Each channel can have processing applied to it either chosen from individual gate, EQ and compressor presets or as a complete channel strip - all accomplished simply by dragging and dropping from a drop-down menu and with lots of tweaking available from virtual knobs.

The mixes you create here are independent of the signal that's going to your DAW, (although you can actually record the audio going through the input channels with the fat channel processing if desired), and there's a scene facility to save and recall any particular mix.

So who's going to need this? Well, if you are recording, having four inputs means that you can record ensembles of several players or a complete drum kit (kick, snare and a pair of overhead mics). Also you get the opportunity to send fully-processed headphone mixes to the players through the line outputs - anyone listening on outputs three and four could have a completely different mix to that heard through the main monitors.

It's not just recording - in a small set-up you could gig without a hardware mixer and effects rack, just a laptop and the 44VSL. One example might be with two vocals and two guitars using the VSL to create both a main mix for the PA and a different mix for your powered monitors all with processing and effects.

This is an effective audio interface for processing a range of inputs and outputs, and would be a useful upgrade from a budget two in/two out model. Add in the Studio One Artist DAW and it's also a practical starter pack for computer-based recording.