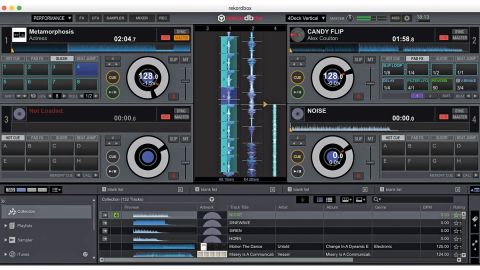 rekordbox, DJ software originally developed for Pioneer by French developer MixVibes has existed for a good few years as a music librarian and track preparation tool for use with Pioneer's range of CDJs and digital music players.

Last year, rekordbox got a significant upgrade in the form of rekordbox DJ - an expanded 'performance' version of the software with full mixing, effects and sampling capabilities.

The first thing you'll notice when opening up the performance mode is how busy the GUI is. To be fair, this hectic feel is largely down to the fact that the software packs in a lot of features.

There's up to four decks of track control, a library browser with tagging and track recommendation system, per-track and master effects - each with multiple slots - plus a looper, beat slicer and eight-slot sampler.

The result, however, is a very busy piece of software, particularly when viewed on a laptop, as it likely will be for most users. The software does have a couple of tricks to overcome this; GUI elements can be hidden/revealed, and it supports multi-screen view.

How useful both of these functions are is up for debate - some functions, such as the mixer, can happily be hidden when used with a controller, but others are just impractical to have tucked away mid-set and, while dual- screen support is nice at home, realistically who's turning up to the club with a second monitor?

More useful is the ability to rearrange the virtual decks and waveforms to sit either vertically or horizontally.

Minor gripes aside, there's a lot to like about rekordbox DJ. While it's Pioneer's first attempt at a mixing application, much of the tech - such as the beat detection algorithms, tagging systems and digital effects - is built upon the company's other DJ products, and as such has benefited from several years of refinement.

It's getting bigger all the time too; a recent update introduced the vital MIDI learn option, opening up the software for non-Pioneer controller users, and several paid expansions are now available, adding DVS support, video mixing and an expanded library of effects.

The software is undoubtedly aping much that works in its biggest rivals - Serato and Traktor - but with its sample sequencer and impressive effects, there are just enough fresh ideas in there.