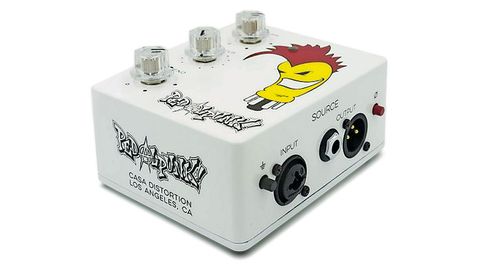 It's not an essential bit of kit, and it's very pricey, but it fills its niche well.

PEDALpUNK comes from US musician and producer Scott Eric Olivier.

It's described as an analogue interface for connecting guitar effects pedals to a computer, although the 'interface' part of that is perhaps a little misleading as it doesn't handle any A/D conversion.

In fact, the device is closer to a DI box that's specifically designed for use with effects pedals. Similar to something like Pigtronix Keymaster, it's main use is converting an unbalanced signal into a balanced one in order to maintain audio quality between an analogue effects loop and an audio interface.

It offers a single XLR/1/4-inch jack input, and separate XLR and 1/4-inch jack outputs for connection to a computer or recording device. On the other side there are 1/4-inch Send and Return connections.

On the top panel you get level controls for the Send and Return, along with a Focus knob, which adjusts the impedance of the signal at the Send jack. There's also a switch for reversing signal polarity.

In all, it's a handy tool for those wanting to run sounds through stomp boxes without the worry of unnecessary background noise. Conversely though, when pushed, the pedal has a secondary function of acting as a nicely warm distortion effect.