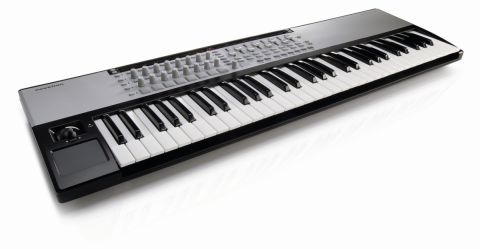 A next-generation MIDI controller that looks great, feels great and works brilliantly. We´ve been waiting ages for a device like this.

The latest ReMOTE keyboards feature their new Automap and SL (Soft Label) technology, enabling your computer and controller to communicate in detail via USB.

The controls on the ReMOTE´s interface are automatically mapped to your software, and the name and value of each parameter is shown on the twin LCDs. This is a fine concept indeed, but not one that´ll capture anyone´s imagination if the controller itself isn´t up to scratch.

The semi-weighted keyboard feels great. The keys respond quickly and are ideal for playing fast, complex riffs. The SL comes in 25-, 37- and 61-note flavours, with the number of keys being the only thing that differentiates each model.

While most users will choose to utilise the supplied USB cable to power the unit and transmit data to and from their computer, the ReMOTE SL can also be used with a power supply and regular MIDI cables if required. We´re reviewing the 61-key version, which is reasonably light and therefore pretty portable.

Above the keys lies the control panel, and this is where the SL´s multiplicity of knobs and sliders is located. Specifically, you get 16 knobs, eight drum pads, eight sliders, a transport control section and a whole multitude of buttons.

To the left of the keys sits a combined modulation and pitchbend joystick. The horizontal pitchbend controller automatically returns to the central position when released, but the vertical controller has two modes: one where it automatically returns to zero (useful if you´re controlling pitch modulation) and one where it doesn´t (handy when you´re adjusting other parameters such as filter cutoff or resonance).

Unfortunately, the switch to change modes is located on the underside of the machine, which may prove annoying if you keep the ReMOTE on a desk or table.

Last but not least is the X/Y pad. This is absolutely perfect for use with synths sporting virtual X/Y controls, such as Cakewalk´s Z3TA+.

The ReMOTE SL offers a luxurious selection of controls indeed, and it´s not something that you´d want to have to configure every time you loaded up a synth. Fortunately, you don´t, thanks to templates and the remarkable Automap system.

Templates are fully editable controller maps that assign the ReMOTE´s buttons, knobs, faders and pads to the instrument´s parameters. Some synths have too many of them to be fully governed by even this number of controls, however, so most of the bundled templates feature several ‘pages´ that can be cycled though. Each page enables the various parts of the interface to control different sets of parameters.

Some really complex synths actually require more than one template. While it is a minor hassle to switch between them, doing so is quick and easy and doesn´t interfere with the creative process too much.

Even more exciting than these individual instrument templates is the ReMOTE SL´s ability to work symbiotically with certain sequencers and software studios. At the time of writing, Automap is supported by Logic, Cubase, Nuendo and Reason.

If you´re not using Reason, the functionality is simple and effective - the ReMOTE SL detects what instrument plug-in you have selected and assigns its parameters automatically. The transport controls are also automatically configured, making it possible to forget the mouse and QWERTY keyboard completely when recording new MIDI parts.

The only downside is that the integration is still a little limited. You don´t have control of the faders in these program´s mixers, for example, and Logic doesn´t yet support intelligent mapping of parameters to controls. However, it´s likely that we´ll see much improved integration as host software updates and improvements to the ReMOTE SL OS are released.

When used with Reason 3, the true power of Automap becomes clear. It automatically detects what instrument track you currently have selected, the control mapping is superb (particularly with the percussion modules - playing drums with the pads is fantastic), and the data entry knob can even be used to control track tempo (great when you´re playing live).

Automap for other applications is promised (with Live next on the list), and if the implementation is anywhere near as good as it is in Reason, we´ll be extremely happy.

The SL is a fantastic bit of kit that opens up whole new ways of working with your music software. It makes synth programming far more enjoyable than it ever was with a mouse, and can rightly claim to be the most complete keyboard controller on the market. Two huge thumbs up.