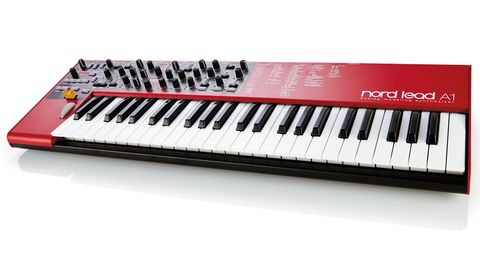 It's intuitive, sounds great and the effects implementation beats the NL4. A worthy successor to the 2x.

Six months since we reviewed Nord's flagship Lead 4, the Lead A1's announcement came as a bit of a surprise, especially as it's unusual for a company to launch two new synths so close together. However, though it looks similar to the NL4, the A1 is significantly different.

Firstly, it contains a brand new Realtime Waveform Engine and secondly, it's a direct replacement for the 17-year-old Lead 2/2x range. Happily, the A1 also costs £300 less than the NL4 (£1,249 vs £1,549) so for those with a smaller budget lusting after the NL4, the A1 seems like a great alternative.

The A1's bright red case, sturdy rubberised dials, hard plastic buttons and stone-effect mod wheel/wooden pitch bend are all standard Nord issue and the same small red LED display found on the NL4 is included (along with another two screens in the Osc section), though once again there's no patch naming except in the editor, so you have to remember your patches by number.

Like all Nords, the A1 is built with the road in mind - it's super-tough and can be picked up with one hand and, although it has the same 49-note keybed as the NL4 (still no aftertouch), the A1 case is a little shorter, so it's more compact.

The A1's basic design reminds us a lot of the simpler synth section on a Nord Stage 2 (minus the sample playback bit). The most obvious omission is the lack of a dedicated filter envelope, so instead you have to use the Mod Envelope to affect the filters' envelope. Also, the amp envelope is a basic ADR/ASR type, vs full ADSRs on the NL4/Lead 2X.

The highlight of the A1 is its streamlined 26-note polyphonic oscillator section (vs 20 notes on the NL4). Though it seems simple on the surface, the interface is very conducive to fast sound creation and you can still make pretty complex sounds, albeit not as complex as on the NL4.

At its heart, the A1 has one main oscillator with four standard wave shapes but in addition there's a hidden second oscillator and a whole bunch of new wave types, plus eight hardwired oscillator set-ups called 'configurations' that are unique to the A1.

You can set Oscillator 1 to use standard square/saw/triangle/sine waves, but things get really interesting when you turn the dial under the Wave screen and select from one of 43 further wave types (47 waves in total, vs 128 on the NL4).

All the waves sound precise and full and the general quality is certainly as good as the NL4 - there's also enough variation to keep most folks happy and we were able to quickly create great-sounding patches that sounded pretty close to the NL4 too.

Compared to the NL4, it's generally quicker to set up/try out different oscillator configurations on the A1 and the preset junkies out there will love that they can achieve complex sounds with little effort! It takes just a few seconds to pick an oscillator wave and configuration type, then you can radically alter the wave's shape (much like PWM), add white noise, or create a sync patch using the hidden second oscillator, plus there are further 'dual configurations' for making detuned patches and more.

You can easily mix in an additional sine, triangle, saw or pulse wave and these can be used as sub oscillators or tuned to various harmonic pitches, plus there's amplitude modulation of Osc 1 via Osc 2 and two-operator FM as well.

This aside, newbies and pros alike will be able to set up and try out complex sounds quickly without having to have a deep knowledge of synthesis - you simply select the Configuration type and turn the Osc Control dial to vary the selected configuration; it really is that simple!

In terms of general functionality, the A1 works similarly to the NL4, so you have four slots for using within programs and performances and you can layer and split sounds easily, plus each slot has its own MIDI channel and dedicated audio output, effectively giving you four independent synths.

You can also pan programs directly from the front panel, which is a welcome addition and, further to this, there's a new Like mode that allows you to temporarily save up to 50 variations of a sound to Like memory whilst programming (great for testing out multiple variations on a patch) and the new Multi Focus mode that allows editing of a chosen parameter across all slots simultaneously is very useful too.

Thankfully, the great Randomize and Mutate modes found on the NL4 are also included and these are a stupidly simple way of coming up with new patches without having to turn any dials - a godsend if you're stuck for inspiration or feeling lazy!

So what's the conclusion? Well, the A1 is a solid synth that enables newbies and pros to get great sounds happening quickly. It's intuitive and fast to program and we have no complaints about its sound, which is typically Nord (ie bold and precise, yet warm and friendly).

Also, whilst the A1 is Nord's entry-level synth, surprisingly it offers some advantages over the NL4, though at the same time you should be aware of the disadvantages, which include no dedicated filter envelope, the ADR/ ASR-only amp envelope, less flexible oscillator set-ups and only one LFO.

Obviously, some corners had to be cut to bring the A1 in at £300 less than the flagship but if we had to choose between the A1 and the NL4, we would have a hard time choosing based on sonics alone (they both sound great).

However, there's no doubt that the NL4 still has a significant edge in terms of deeper tweakability/functionality and its dial per function ethos is still very appealing, particularly for more experienced synthesists and live tweakers, not forgetting that the extra controls are very handy for MIDI controller duties too.

Choosing between the A1/NL4 will ultimately come down to budget/required features and, though some may disagree, we think the A1 makes sense as a product, distilling the essence of the NL4 into something that's fun, intuitive, and addictive.

If you want lots of hands-on tweakability, dedicated amp and filter envelopes, powerful morphing, more flexible oscillator set-ups, two LFOs and a more versatile Arp with rhythmic patterns, then definitely go with the NL4. But if you want the essential Nord sound with more versatile effects/ effects implementation and a simpler interface for less cash, the A1 is a very appealing package.

Having said that, we hope Clavia will make a NL5 soon and include the best aspects of the A1/ NL4 along with aftertouch, sample import and the NL3's ring LED dials. For us (and we daresay many others) this would be the ultimate Nord synth!