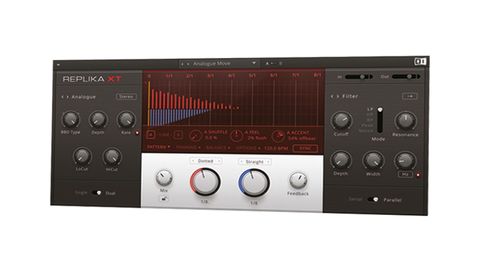 Originally released for free under a Christmas promotion in 2014, before getting a regular pricetag shortly after, Native Instruments' Replika is a straightforward delay plugin, incorporating a single feedback delay (regular or ping-pong), phaser and filter modulation effects, and three Styles (Modern, Vintage Digital and Diffusion) that influence the overall sound.

Replika XT (VST/AU/AAX) doesn't replace Replika (which now sells for £44), but builds on its design, adding some new features and enhancing existing ones to deliver a very broad range of delay, modulation and even reverb-like effects.

The new central display serves as a selection page when choosing a Style or Modulation, and a colour-coded (red for delay A and blue for delay B) display showing delay timing, level, panning and output mix the rest of the time.

Once you look beyond its key delay parameters, Replika XT's behaviour is mainly influenced by the Styles and their associated controls.

To our ears, there are three standout options: Tape, Analogue and Diffusion. Tape delivers good and flexible tape-style sonics, with enough general dirt to make activating the rather overbearing Noise setting unnecessary.

Analogue really captures the essence of those early delay units, with convincing pitch changes when the delay timing is tweaked on the fly. And while the reverb-emulating Diffusion Style may seem like an odd inclusion, it really works, conjuring up some wonderfully long, evocative spaces.

The seven Modulation effects sound excellent, adding a further layer of processing to the delayed signal. The Filter, Frequency Shifter and Pitch Shifter can be placed inside the delay feedback loop, too, for echo effects that evolve in very interesting ways.

At the bottom of the central display, a fold-up tabbed panel features further controls. In the Options tab, you can select whether the dry and delayed signals or just the delay feed the Modulation effect, while the Pattern and Panning tabs enable extensive tweaking of the timing and stereo positioning of each delay line. Pattern controls comprise Shuffle, Feel (from Rush to Lag) and Accent (100% Onbeat to 100% Offbeat), allowing quick but powerful overall adjustment of the delay's rhythm.

Further, delay mode-specific parameters include A/B delay Balance for Level and Feedback in Dual mode, and L/R timing offset (0-25ms) and Ducking in Single mode. We particularly like the last one, as it can be set so that the delay fades up from its initial low level as the feedback progresses. The tempo sync option is independent for each delay line.

Replika XT delivers a mixture of regular, panning and modulated delays alongside an interesting array of spatialising, pitched and oddball effects, and has plenty to offer sound designers and creative producers alike. In a word, brilliant.