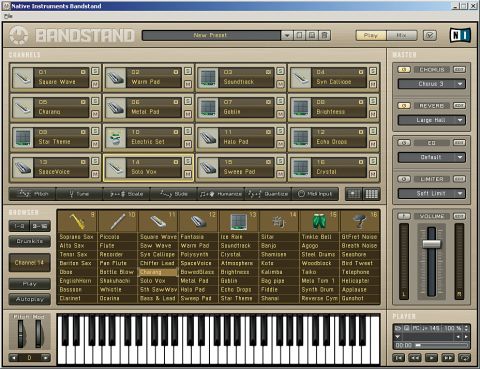 NI seem to have got confused when producing Bandstand's sample library

Tucked away behind an innocent-looking cappuccino bar in Schlesische Street on the west side of the Berlin wall, a crack team of computer music scientists have been trying to fill a black hole in our universe.

However, this particular black hole isn't comprised of Dark Matter - it represents the curious lack of high quality General MIDI software on the market at present.

For many musicians, General MIDI (or GM, as it's more commonly known) has fallen into disuse. Its original concept was well-intentioned: divide the 128 MIDI Program Change messages into 16 specific categories of eight presets each so that MIDI files could be played back properly through any GM sound module.

Unfortunately, the rise of GM led to the production of some rather bland-sounding MIDI modules. As a result, many serious musicians turned their back on it, and it's been relegated to the creation of automated background music and mobile phone ringtones.

For those who've kept the faith, however, GM technology can offer great rewards. Yamaha and Roland extended the system with their XG and GS standards, which offer more presets and many editing and layering options.

These systems often have insert effects and parametric EQ, thus creating an advanced music production environment, even when used with the most humble of MIDI sequencers.

NI's Bandstand is a software GM module. You get 16 parts (assigned by default to MIDI channels 1-16) and - unlike most hardware GM modules - an attractive yet simple display of your instrument assignments. At the touch of a button, this becomes a full-window mixer.

Unfortunately, when we started to test Bandstand, it wasn't long before we hit problems. For one, none of the mixer controls has a numeric display.

Native Instruments say that this is to keep things simple, but in GM file programming it's vital to be able to see the numerical values so that they can be copied back into the sequence as Control Change messages.

Similarly, there's no display to show which MIDI program numbers correspond to which preset.

Elsewhere, the user interface seems bugged when you switch between Basic and Real reverb modes. The Time control starts moving erratically when you use the mouse to change the reverb type, and it sometimes stops working altogether in Real mode.

Although the reverb is of good quality, its default setting also seems far too dry compared to other GM modules.

Another problem is that the Modulation controller does arbitrary things depending on the instrument. On some instruments, it adds vibrato (as expected), but on others, the results can be very weird.

Sometimes, it sweeps the filter down to nothing - and the filter also exhibits unpleasant zipper noise during sweeps. Weirder still, if the Harp is selected, the modulation wheel affects the release time of all things!

The next gripe is that the MIDI file player doesn't always cancel the sustain pedal when you stop playback (a known bug), so you're left with notes hanging on indefinitely.

Also, if your sequence adjusts the supported XG/GS Continuous Controllers - such as Attack or Release - then the low-pass filter momentarily goes severely south for no reason (another known bug).

GM compliance rules state that modules must respond "automatically and immediately upon demand by any GM1 app", but Bandstand doesn't.

Even uncomplicated MIDI sequences can hit this severe performance limitation - the file player knows in advance what Program Changes are coming, but makes no effort to preload presets. The result is the frequent loss of performance data immediately following a program change.

Additionally, the instrument squares only light up in time to MIDI when a sound is loaded. This is unfortunate, since one of the most common programming errors is leaving your keyboard accidentally set to a blank channel. Bandstand makes this look like no MIDI activity is occurring at all, which can be very confusing.

All things considered, this is a very disappointing product from NI. To claim that this non-GM-approved product "establishes a new benchmark far beyond conventional GM modules" is an exaggerated claim that pays no respect to the many years of research and development that Roland and Yamaha have put into their impressive product lines.

You need only listen to the demo songs produced on such sound modules to see that they're far more sonically flexible than Bandstand.

What's more, no musician would compare Bandstand to the dreadful MIDI tone generators that are built into desktop computers, but this is precisely what NI have done in their promotional video.

In practice, pro musicians use pro tools, such as the Yamaha MU128, Roland SC-88 Pro or SC-90. Such systems give you true GM compatibility with creative enhancements that take your sound-mangling skills to new levels.

It's not the technical quality of Bandstand's sound that's bad - it's the musical quality. Unlike with XG or GS, there are no variations for each instrument, so you're stuck with bland presets which drain your creativity as badly as General MIDI ever did.

We were excited by the idea of this product, but after being so struck by the stunning capabilities of NI's Guitar Rig 2 and the perfection of their B4 II Hammond Organ emulation, Bandstand is a huge disappointment. We simply cannot recommend it.