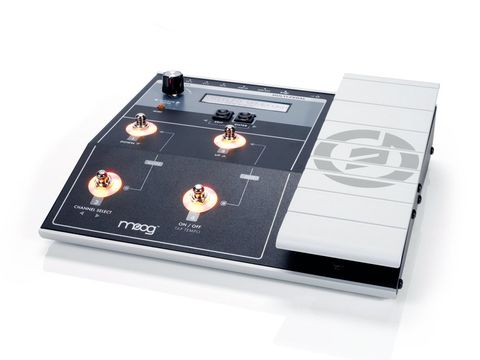 The MP-201 is a high quality CV/MIDI controller with a truly unique set of features that puts it in a class of its own.

The two data buttons and the rotary encoder knob are all from the current Moog design stable and the build is up to the sturdy, well-crafted spec one expects from the synth giant of North Carolina.

As a foot-controller, the MP-201 is a wholly unique product. It has four channels assigned to the four footswitches with three possible control modes.

The first mode is Expression, which will send the footpedal value as CV (Control Voltage) to the associated CV output (one of four ¼" TS jacks) as well as to any MIDI CC. Each of the four channels can also send MIDI Bank and Program Change messages when a preset is selected.

The second mode is LFO, which produces an oscillation (triangle, square, saw down, ramp up sample & hold and noise) as both CV and MIDI CC. The final mode is Gate, which can be assigned as momentary (single on/off trigger when the footswitch is pressed) or latch (toggling an on or off state each time the footswitch is pressed), again, via CV and MIDI.

For visual feedback, each footpedal has a ring of LEDs around it, the upper quarter of which is red and indicates on/off status, while the lower three quarters are yellow and equate brightness to the value being sent.

As well as sending/receiving MIDI information via the MIDI In/Out sockets there is also a USB connection so the MP-201 can be plugged directly into a computer and picked up as a MIDI device. The standard MIDI In/Out is run parallel to the USB, though there are options to change how the MIDI is split.

The controls on the MP-201 are simple, with plenty of foot-sized room around them. The expression pedal is large and sturdy, staying firmly in place once it has been set.

The pedal can be assigned to any combination of the four channels and has individual value settings (from 0 to 4095) for the heel/ toe positions as well as the initial setting when a preset is selected. This value is down-scaled to the relevant 0-127 MIDI and is anti-aliased for CV.

The four footswitches are used in several ways depending on which mode is being used. In Single mode footswitches 1 and 2 navigate through the presets, while switch 3 toggles through the four control channels and switch 4 turns the selected channel on/ off or is double hit to set tap tempo.

In Quad mode the switches turn their respective channels on/off as well as becoming tap tempo entries when hit twice. Toggling between Single and Quad mode is achieved by pressing switches 1 and 3 simultaneously, while pressing both 2 and 4 enters Edit mode for setting the preset parameters. This is handy for those who need to adjust on the fly, and the LCD screen is large enough to see comfortably when standing up.

Though you can edit with the footswitches by hand (with the pedal used for setting values) there are also two finger sized edit buttons and a rotary encoder for this purpose.

In Edit mode preset creation, adjustment and storing are simple. There are slight differences in the menu when the channel mode is changed but they all have MIDI channel, CC, Bank and Program Change settings.

In Expression mode there are the heel, toe and initial pedal value settings, and for Gate there's a choice of momentary or latch for the Gate trigger. LFO mode involves the most parameters with six waveforms (see above), the footpedal mode (rate, amount or offset), the LFO off mode, the LFO sync (ditto) and initial rate. There are also initial LFO amount and offset values as well as the expression pedal range settings.

The fourth Utilities mode is used to edit global settings. The user can specify how values are represented, either in volts (ie, CV based), MIDI value (0-127) or the precision value (0-4095).

Firmware can be upgraded via MIDI SysEx, and MIDI merge options for the MIDI I/O and USB MIDI can be edited. The footpedal range can be calibrated here and the CV range can be toggled between unipolar (0v to 5v) and bipolar (-5v to +5v) as not all synths and pedals use the same range. It would be nice to be able to change this per CV output, but this would be even more expensive to install.

The MP-201 is simple to set up and despite only having one pedal and four switches, it can do things not commonly found in foot controllers. The fact that it has up to four LFOs available through CV and MIDI makes it an inspiring addition to a mixed analogue and digital system.

There are just enough settings to make up very complex presets, but not so many that you get bogged down in endless menus. Visual feedback is particularly mesmeric with the pulsating yellow lights, though at high LFO rates it becomes impossible to see them flicker.

Switching between 'Single' and 'Quad' modes takes a bit of getting used to, but it begins to make sense quickly and is a great tool during live performance.

The MP-201 is a unique controller: we know of no other that combines MIDI and CV with LFO generation, an expression pedal and use as a USB MIDI device. This makes it hard to judge its value, but it's certainly not cheap.

It's built to endure quite a beating and one must remember that CV is expensive to install as it is not all that common (so there aren't a whole host of off-the-shelf chips to make up the circuits).

If you're a performer using CV and MIDI gear, whether it's analogue and digital synths or guitar with rackmount effects and Moogerfooger pedals, this is the best (and only) product by a long mile. It may not be cheap but it has no direct competition.