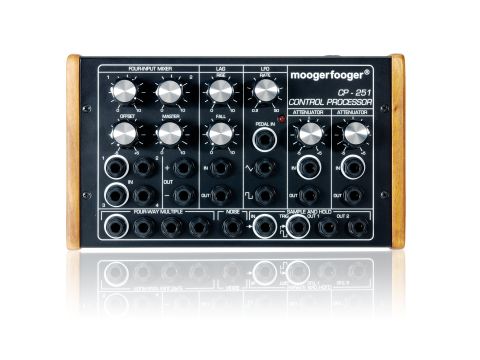 A worthwhile and inspiring investment for the hardcore CV and Moog/ Moogerfooger user.

The success of the Moogerfooger effect pedal range has brought the analogue interconnection joys of CV (Control Voltage) back into vogue. Though the Moogerfooger pedals each possess CV connections for expression pedals, hooking up to analogue synths or other pedals, a bit of extra control seems to have been on the minds of the folks at Moog Music.

This thought has produced the knob and jack socket-fest that is the CP-251 Control Processor, offering patching, mixing, modulation and signal generation for anything CV related. Our test unit was accompanied by the entire Moogerfooger range, so the review was carried out within this context.

The CP-251 is a 3U deep, half-rack width unit (a specific rackmount kit is available) with the classic Moog knob and wooden side-panel stylings. It runs off a standard 9v supply.

Patching is via 1/4-inch TRS or TS cables. A compatible expression pedal can also be plugged into some of the jack sockets, as is common to all the Moogerfoogers, with the corresponding sockets marked by a different coloured socket ring.

The unit's functions can be broken down into seven parts. Firstly, there is a Four-Input Mixer which allows for the summing of separate CV signals. Two of these can be attenuated, while two are summed at their input level. With the Offset and Master controls the overall mix can be altered and then sent on its way in positive and negative voltage form.

Below the mixer is a Four-Way Multiple which is a row of four sockets that allow one input to be routed to three other destinations. Next to the Multiple is Noise Source, a single socket outputting white noise at CV level.

Adjacent to the Noise is the Sample and Hold module with a source input, a trigger input and two outputs, the second of which is through a low-pass filter linked to the LFO rate. Without getting into the details of what Sample and Hold is (download the manual for a good explanation), the input source and trigger are connected to the Noise and LFO square wave respectively unless an external source is plugged in.

The fifth function is the Lag module, which has single input and output sockets and two knobs (Rise and Fall) for reducing the rate at which a waveform voltage increases and decreases. In practice this means you can turn a square wave into a sawtooth (ramped up or ramped down depending on whether Rise or Fall is 'lagged') or pinch it into a tiny pulse by using both knobs in the extreme.

Next to the Lag is the LFO, the throbbing heart of the CP-251. The single knob controls the speed (from 0.2Hz to 50Hz), with an output socket for both square and triangular waveforms. There's an additional input for external control or modulation of the LFO rate.

Finally there are two Attenuators, each with an amount knob and single input/output sockets. These are used for controlling the overall voltage of a signal to soften its effect.

Following the manual, we turned up the resonance on the MF-101 Low-pass Filter pedal to get it self-oscillating and started connecting its CV inputs to the CP-251. Connecting the two LFO outputs to the mixer and then routing the sum to the MF-101 frequency CV input via the Lag and an Attenuator produced sumptuous oscillations that seemed limitless.

If things get out of hand, the Attenuator provides the requisite level control. Once the MF-102 Ring Modulator was added after the filter it all got far too exciting. The initial CV routed to the filter cutoff could be duplicated via the Four-Way Multiple to the Ring Mod's frequency and rate inputs, which sent the resultant sound into orbit.

Using a guitar as the audio source revved the results up even more, allowing the filter to function as a filter again and turning the guitar into a loose tonal and rhythmic source for feeding the machine. Subtle yet rich effects are easily achievable and the level of fine tuning with the CP-251 is staggering.

As well as the Low-pass Filter and Ring Modulator, the MF-103 Twelve Stage Phaser and the MF-104Z Analog Delay responded very well to some CP-251 action. The Phaser, as one would expect, just got wetter and weirder in a way we hadn't heard from a phaser before.

The MF-107 FreqBox is a monster anyway, so adding external control to it only further increased its tendency towards evil doing, whereas the MF-105 MuRF and MF-105B Bass MuRF were a little less instant than with the other pedals.

Though we've tried to describe the effect the CP-251 has on the Moogerfooger pedals, it's not a wholly bi-directional relationship. You may plug the Phaser's oscillator CV out or the FreqBox's envelope output into the CP-251 to route it to more pedals for syncing up. The only real limits are time and the amount of cabling you can bear to have running around.

Our only advice would be to use straight (not right-angled) TRS/TS plugs with short bodies so as not to impede the knob tweaking, which is what it's all about really!

The CP-251 is a fantastic addition to a Moogerfooger collection or any combination of CV-controllable equipment. It does come at the same cost as another Moogerfooger pedal, though, which may put the casual CV user off.

For those who are being won over by Moog Music's crusade to put CV back at the top of the control pile, however, it's a price worth paying for the extra range of tone shaping, inspiration and sheer fun.