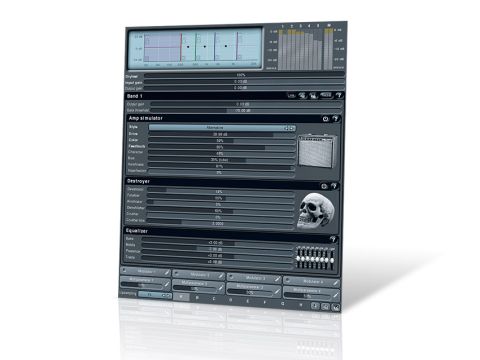 Another multiband winner from MeldaProduction and, once again, it comes at a price that's hard to resist.

This Melda plug-in is billed as being for processing guitars and synths, but with a possibly wider range of uses thanks to its deep structure.

The multiband and modulation aspects of MMultiBandDistortion are identical to MMultiBandChorus, which we recently looked at, so we won't labour the point here.

Suffice to say, the plug-in offers up to six adjustable bands, up to 4x upsampling, MIDI learn, four global modulators, definable LFO shapes, full automation and randomisation, and the ability to process mono, stereo or up to eight channels simultaneously for working in surround sound.

Each band has amp simulator and 'destroyer' sections, the former offering emulations of generic styles of guitar amp (no specific brands or models are named), while the latter houses five purely digital distortion algorithms, flanked by a rather silly skull graphic.

The aim is to provide a versatile sound that covers everything from clean amp sounds, passing through high-gain tones and on through to over-the-top decimation of your signal. In fact, it's very easy to overdo things and end up with a complete mess that produces screaming feedback, even with no input signal present.

There are 12 amp types: two bass, two 'deep', two rock and five metal, as well as single models for pop, country and alternative styles. While they don't have the same level of sophistication found in dedicated amp sims such as Guitar Rig or AmpliTube, they do cover a wide spectrum of axe-based tones.

Once you've opted for the amp type, there are further controls for things like the Drive, Color (or tone) and Feedback, as well as quirkier parameters such as Bias, where you can choose between extreme, tube and transistor sounds. The amp models also include cabinet/mic simulation, although this isn't adjustable.

The five digital distortion algorithms are represented as six sliders, so that's one slider each, except for Bitcrusher, which has two. These can be employed simultaneously per band and, when used sensibly, can add an edge to the amp sim tones.

Right at the bottom, there's a basic EQ section, comprising bass, middle, presence and treble controls for further sculpting of each band's tone.

No axe to grind?

MeldaProduction have aimed this plug-in at forward-thinking guitarists who want to add distortion effects to their axe sounds. Synth users who are in need of a multi-faceted distortion unit are also on their hit-list, and we can concur with their choice of target audience.

The plug-in's multiband nature lends itself perfectly to effecting bass and lead guitar tones, whether you want to zero in on the low-end to warm your sounds up, or produce some gnarly high-end frequencies in order to give your patches a bit of added bite.

However, there's no reason to stop there. MMultiBandDistortion is a flexible plug-in and it works well with other instruments too. For example, it's highly adept at trashing and scuzzing up drum tracks. You could easily slap some low-end grit on the kick drum or, conversely, decimate the hi-hats or snares, while leaving any bassier percussive elements punchy and defined.

MeldaProduction's multiband engine provides an enormously flexible palette of sounds, from quick one-band presets for instant tones, to extremely complex six-band setups that would be practically impossible to recreate with hardware - well, unless you happen to have six different amps and a device to split the signal into as many frequency bands!

Then there's the excellent MeldaProduction Envelope System for modulating parameters - including the band positions themselves - via the syncable or envelope-based LFOs. All of this adds up to a remarkably deep plug-in that offers a seemingly endless range of distortion effects.

Hear what the MMBD can do with our audio demos: