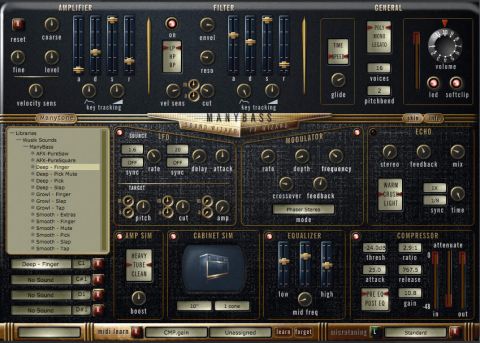 ManyBass is well-designed and does a good job of imitating a bass guitar. It's definitely fit for purpose.

Regardless of what kind of music you make, you won't get far without bass. If you're making electronic music, bass tends to be covered by a favourite synth, but it can be less straightforward for rock, pop, jazz or more 'classical' styles.

Accordingly, all sorts of specialised sample libraries for bass have risen to prominence, each offering a full range of articulations. With ManyBass, ManyTone is attacking this market head on.

The software is downloadable from Manytone's website and the core library arrives in 12 separate folders of 195MB each. The site gives specific instructions about saving these sub-libraries into a master folder, which is then recognised as the root directory by the ManyBass instrument.

The architecture is designed in this way because ManyBass is available as a front for two separate bundles. Alongside the basic library, the Big Bass Bundle provides additional sounds via the Ultimate Bass Kit, Upright Bass and Acoustic-Electric Bass collections, which are well worth acquiring.

It's worth noting that Manytone has released an update for ManyBass which adds direct disk-streaming functionality. This dramatically decreases load times for the factory library.

When it comes to the sounds, there's something for everyone and the quality is universally excellent. Some factory sounds seek to emulate the signature tones of legendary bassists, whilst others speak directly for themselves.

If you're a PC user, you can use Manytone's dedicated ManyMapper software to load or create new sounds from wave audio content. There are even raw waveforms with which you can create synth-style sounds, so every musical style is catered for (though we still reckon it's worth getting the Big Bass Bundle too).

Realistic bass guitar is where ManyBass excels, though. If you're in a band and looking for a reason to sack your lazy bassist, this could be the answer. The picked, fingered and slapped articulations are convincing, while careful velocity multi-switching ensures that the dynamic layers remain convincing.

A powerful feature of the ManyBass interface is the ability to easily load up to four articulations of the same bass sound into predefined key-switch locations at G0, G0, A0 and A0. So, for example, you could load a fingered bass program and also assign slapped and muted variations alongside some taps or noises to create a master program.

With sounds that play and mix well, ManyBass is an instrument that deserves a big future.

Listen to these audio examples to hear what ManyBass can do: