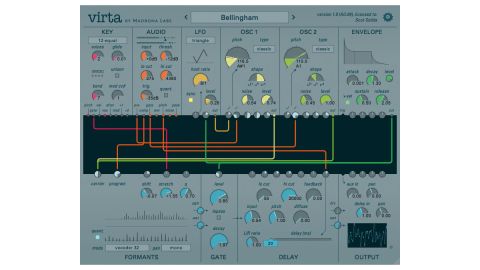 A cross between a vocoder and a semi-modular pitch-tracking synth, with routing options galore, Virta sounds fabulous but is absolutely brutal on the host system.

Initially inspired by the pitch tracking processor from Korg's MS-20, Madrona Labs' Virta is a synthesiser with multiple personalities.

It's a fully patchable semimodular synth, but it loads as an effect, tracking the pitch and dynamics of the incoming audio and using it to 'play' the internal synthesiser. Sing a melody into Virta and its oscillators follow the pitch.

The internal synthesis engine features formant-based oscillators that can be driven by incoming audio or MIDI and are available as carriers and/or modulators in its complex vocoder module. Oh, and it can also be used as a 'regular' effects processor. Quite versatile, then!

Virta's interface strongly resembles those of Madrona Labs' previous synths. The modules in the top section generate audio and modulation signals, while the bottom section processes them, and a virtual patch field in the middle is used to route signals between modules.

Two oscillators are provided. In Classic mode, they behave like analogue oscillators, emitting sine, square, sawtooth waves (and anything in between), or noise. For vocal-style sounds, the oscillator Vosim mode offers a user-adjustable number of vowel formants, with higher numbers providing more harmonics. The Peak knob travels through vowels Oh to Ah to Ee. All of this can be modulated.

"Virta has an appetite for system resources. Many of the factory patches sorely tested our six-core Mac Pro."

The Key module can be employed to play Virta like a traditional synth, using MIDI notes and CCs to control the pitch and other parameters. Over 200 tuning scales are on hand, and Scala files are supported should you need more. Virta delivers four-voice polyphony. That's not a lot, but per-voice CPU usage is high, so you may actually find yourself reducing that number in the Key module. Unison and glide are also supported.

Incoming audio signals can be compressed and filtered in the Audio module, where the pitch and amplitude are also analysed and the results made available as modulation sources. Since Virta can use the dynamic shape of the audio as both a trigger and modulation source, a compressed signal offers an alternative to the fully dynamic one, which is simultaneously available as a control output.

The synchronisable LFO outputs sine, square, saw, ramp, triangle or noise waves - the last not technically random but rather a Buchla-style cycling pseudo-random wave - plus a 'blip' waveform that emulates the waveshape made by a struck, vibrating object.

The top row of modules is rounded off by an envelope generator. It's a traditional four-stager, but each stage can be modulated by any incoming signal via the patching panel. A trigger input also enables the envelope to be fired by the other modules.

Much of Virta's power comes from the Formants module. Here, any signal arriving at the Program (modulator) input is analysed by your choice of four vocoder algorithms and used to shape any incoming Carrier signal. You can choose 8-, 16-, 32-, or 256-band vocoder modes, or a Carrier Thru option that applies no vocoding.

Formant frequency is adjustable; the Q control sets the width of the formant filters; the Quant(ise) function snaps the formant pitch to the scale selected in the Key module; and the Stretch control lets you alter the relationship between the frequencies of the detected formants and the synthesised ones, bringing them together or spreading them further apart.

The Program and vocoded (or Carrier throughput) signals are routed through a Gate module (with low-pass mode) that emulates Buchla's dynamic VCA/filter, known for its percussive qualities.

To the right of the Gate, the Delay module is a delay line with pitchshifting, diffusion
and filtering of the feedback signal. All the expected parameters are onboard, and all can be modulated.

The Output module houses controls for level and pan, an oscilloscope and an Aux In for patching directly into it, rather than using the pre-described Formants > Gate > Delay > Output routing. You could, for example, mix a vocoded, gated oscillator with the other, unprocessed oscillator.

It all adds up to an interesting sonic playground, and although Virta can act as a traditional vocoder, it's at its best when used unconventionally. Drum loops become hissing, pumping industrial soundtracks, and vocals can be made to sound like wailing alien requiems.

The pitch detection is very good indeed - a talented singer could play virtuoso performances on this synth with their voice. Nonetheless, you're more likely to find yourself whipping up complex patches that pay only passing attention to pitch, instead using the incoming signal as the jumping off point for wilder sonic adventures.

Alas, a price must be paid for such inspiration. Virta has a voracious appetite for system resources - indeed, the developers warn of it on the website. Many of the factory patches sorely tested our six-core Mac Pro - this isn't a synth for those who fret over every last CPU cycle.

Virta isn't going to appeal to everyone, especially if your system resources are easily taxed, but if you're looking for a new take on vocoding, unusual vocal effects, or out-there soundscapes, it's definitely a synth that's as interesting as it is inspiring.