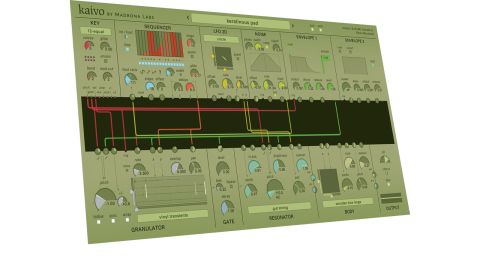 It may be CPU hungry, but it makes every cycle count with its engaging architecture and dazzling sounds.

Madrona Labs' debut plugin synth, Aalto, coupled a striking combination of synthesis techniques to a fuss-free semi-modular architecture to make a powerful yet accessible instrument with a highly characterful sound. Now Kaivo does the same, but built on an even more ambitious engine.

Kaivo is ostensibly a physical modelling instrument but with a major twist in that its exciter module is a full-on granular synth - the Granulator. It also uses Finite-Difference Time-Domain as its modelling method, which lets it "make more natural-sounding, accurate models" and gives it "the ability to feed signals in and out of the model at any point, and make localized behavioral changes."

In other words, it's big on acoustic realism as a technical and conceptual first principle, and totally freeform in terms of control signal routing.

The core of a Kaivo patch, then, is a sample loaded into the Granulator, up to eight seconds in length. A good selection of categorised samples are included (nature-inspired, mechanical, vocal etc) and you can load your own - but this requires manually placing them in a specific directory as the Import option doesn't currently work.

Up to 16 grains can be created per voice with grains beyond the set limit killing their predecessors on a first-in- first-out basis; a pair of sliders set the centre points in time and channel mix (audio files can be up to four channels 'wide') at which new grains are created; and the Pan dial positions them in the stereo field. Grains are faded in and out to avoid clicks, and their lengths can be set anywhere from absolutely tiny to the full length of the loaded sample.

At higher rates, the perceived pitch is affected, so modulating Pitch and Rate together is the key to smooth, pitched sounds - although that doesn't mean you should always do so. The regularity of the grain creation rate can also be randomised a touch by activating the Granulator's built-in Noise modulator.

The Granulator's output is sent via the Gate section (dynamic shaping and filtering) to the physical modelling Resonator and Body sections, which come together to create your basic modelled instrument, 'excited' by the Granulator. The choice of Resonator models comprises eight strings, chimes and springs, while the four Bodies on offer are small and large wooden boxes, a metal plate and a frame drum.

Many aspects of these two resonators (for that's what they both are) can be adjusted, from Pitch, Brightness and Sustain, to the position within the Resonator at which it's excited by the Granulator output, and the physical connection points between the Resonator and Body. The Nonlin(ear) controls inject some chaos, introducing new partials, shifting the frequencies of existing ones and generally 'fuzzying the edges' for a more organic sound.

Finally, at the very end of the signal flow, the Output section hosts a basic tone control (Tilt), a Juno-60-inspired chorus and a limiter.

Kaivo is a veritable modulation playground. Literally all of the controls in the Granulator, Gate, Resonator and Body sections can be modulated, each with its own depth setting, and featuring both linear and logarithmic mod inputs for the Granulator and Resonator Pitch knobs.

At every operational turn, another endless avenue of stretching, warping, animating sound design possibilities reveals itself, while the GUI provides full (although low-frame rate) visual feedback on all modulations to keep things readily comprehensible.

Sonically, Kaivo is very much one of a kind, as you'd expect given its unique combination of generators and processors. It can do a great line in 'realistic' physical modelling, but what it really excels at is the mad, textural stuff: twisted pads, elemental ambiences, bonkers impacts, terrifying Texas Chainsaw metallics, the distant sound of space...

Obviously, the source sample is hugely influential on the final result, but there's no limit to what you can do to it using that powerful arsenal of modules. And once you've got your head around the basics of patching it, Kaivo is nowhere near as difficult to handle as this review has probably made it sound.

Indeed, the only fly in the ointment is the synth's extraordinarily high CPU usage but Madrona promises that this will be reined in with future updates.

Kaivo is truly inspiring to use, sounds wonderful and does things that no other synth can. Innovative, edgy and awesome.