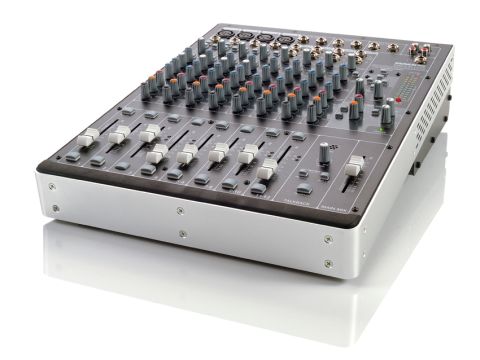 A practical and versatile recording front-end at a reasonable price.

The Mackie Onyx 1220i combines an analogue mixer and a computer audio interface, which makes complete sense. It gives you the familiar hands-on layout of a mixer while feeding audio directly to your computer with convenience and speed.

To give you some further details, what you get is a 12-channel analogue mixer combined with a 16 x 2 FireWire interface. What's more, it can be used with Pro Tools (a first for a non-Avid product).

Extremely robust and powered via an IEC lead, the 1220i features four mono mic input channels plus another four stereo line inputs that can be used in mono by connecting the left input only. The four mono channels are equipped with insert points and sport both an XLR mic input with individually switchable phantom power and a 1/4-inch jack input, which, in the case of the first two channels, can be switched to Hi-Z operation for plugging guitars and instruments in directly.

Each channel has a switchable high-pass filter (18dB/octave below 75Hz), plus a three-band EQ offering up to 15dB of cut and boost for high- and low-shelving EQs (at 12kHz and 80Hz respectively) and a swept midrange (100Hz to 8kHz) EQ. The stereo channels each have the same low and high EQ with a single midrange knob centred on 2.5kHz.

All channels feature two auxiliary sends, each globally switchable between pre- and post-fader operation. Each also has a panpot, a 60mm fader, a solo switch and a mute switch that has a secondary function of routing the audio to an alternative (alt 3/4) rear panel hardware output.

Routing audio from any channel to the equivalent FireWire input on the computer is automatic - a FireWire switch nestled just above the EQ section will determine if it is sent pre or post-EQ. Aux sends 1 and 2 are automatically sent on FireWire channels 13 and 14 and the main mix on 15 and 16. The stereo output of the computer can be routed back to the mixer through stereo channel 11-12 for monitoring or for integration into the mix, it can also be directly assigned to the main mix.

A compact master section offers volume controls for the control room outputs and headphone outs plus options for setting the sources. Rotary knobs control the volume of the stereo auxiliary returns and there's a talkback mic built-in with level control and routing to the headphone output and the auxes.

The 1220i is very easy to operate. All the physical controls are neatly and logically laid out, while integration with all the major DAWs is instant. Mac software works via Core Audio, drivers for PC are supplied and quickly installed, while Pro Tools M-Powered 8 users need to buy a Mackie Universal Driver upgrade (this costs $50).

The 1220i is a practical, compact size, easily transportable and well-suited for sitting neatly on a table top, but the 12-input channels give the unit a certain amount of versatility for multitrack recording. The elements of a small ensemble, a drum kit with kick, snare and overhead mics or even a full band with a mixture of mic and line inputs can all be sent simultaneously to separate recording tracks via FireWire, as can the main mix.

One big advantage of using an analogue desk for recording is in making latency-free overdubs - monitoring the input channel directly without any round-trip through DSP - and the 1220i is well set up to do this, balancing the input channels against any computer output coming back through channel 11-12.

The two aux sends can be used for separate cue mixes when recording or to feed foldback monitors in a live situation. Alternatively, as both aux sends have a FireWire connection, you could utilise them, playing live, to access plug-in effects on a laptop to add to the mix.

Sound wise, the Onyx mic amps have a proven track record and the four in the 1220i give quality results with a range of microphones. Likewise the Perkins EQ is practical and musical, combining plenty of opportunity for sweetening the sound at top and bottom with some useful shaping of the midrange. It's great that you can do this while recording the signal, if desired.

No problems with the A/D converters here either - what you hear gets recorded accurately.

The 1220i would be a very practical purchase for the home or project studio and makes great sense as a front end for any computer-based DAW. And with Pro Tools compatibility that really does mean any DAW.

So, is this a best of both worlds solution We think so - Mackie has come up with an affordable and extremely well thought out integration of mixer and interface that makes light work of recording audio to your computer.