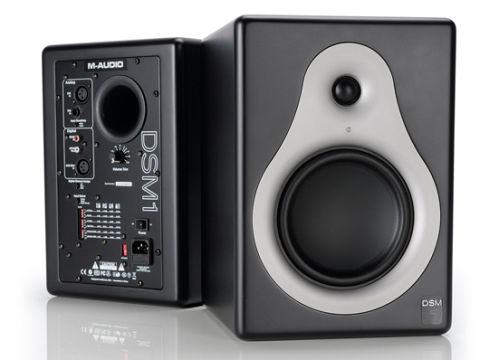 The DSM1s definitely deserve some of your ear time if you're shopping at this price level.

M-Audio's DSM1s represent the smallest (and cheapest) model in M-Audio's new 'middle' range of monitors. Built in collaboration with Digidesign, they have 'bigger brothers' in the form of the DSM2 and DSM3.

The DSM1's appearance is clean and attractive, if slightly functional, with a front-panel LED indicating that power is present. So, is the slightly constrained design reflected in the sound and options on offer? Not at all.

Most of the action happens at the back, with XLR, TRS, S/PDIF and AES/ EBU inputs all present, with digital specifications of up to 24-bit and 192kHz supported. Here, clearly, is a monitor designed to deal with signals from almost any studio device you can think of.

The power switch is also mounted on the rear panel, which is a touch frustrating, particularly if you're going to mount these speakers any further than an arm's reach away. Having front-panel power buttons makes switching from monitors to headphones to check mixes much more simple, for instance.

Also round the back you'll find the EQ controls which can be used to tailor the sound of the DSM1s to the space in which they're going to be used.

This is standard practice these days but welcome nevertheless - if you know your room falsely amplifies bass, mid-range or treble and affects your mix accordingly, here's your chance to address any such issues. Lastly, you'll find the analogue gain dials which set the output level. There's a decent range here, from -22dB to +10dB.

Again though, we would see no disadvantage to these being front-mounted for ease of use.

The DSM1 produces a clear, even tone and we were really impressed by some details in particular.

We found the bass to be solid and focused and, going up against some of its closest price rivals, this is among the most impressive features of M Audio's monitor, despite the relatively modest 6.5-inch cone. The treble end is also clear without becoming too fizzy and uncomfortable at higher volumes, and without providing the artificial sheen you'll hear on cheaper monitors.

For us, the mid-range is a touch less convincing. It's still solid enough but it almost seems as though busier mixes simply can't quite find all of the room they need to express themselves and the mids become the area where this congestion becomes most apparent.

However, this characteristic does present itself simply as 'busy-ness', and whereas other monitors at this price can sound unpleasantly coloured in the mids, the DMS1 merely sounds a tiny bit crowded, which is the lesser of two evils.

Of course, if you find this aspect of the sound overwhelming, you can turn your attentions to those rear-mounted EQ switches, which certainly help reduce problems somewhat.

The DSM1s are impressive and with this range, M-Audio is certainly signalling its intention to be taken more seriously among its peers in the mid-price monitor market. This, we suspect, may represent the company's biggest challenge in selling these speakers, as its best known for its achievements in other sectors of the pro audio business.

However, this is a product that lives up to its price tag and, as such, deserves a thorough listen.