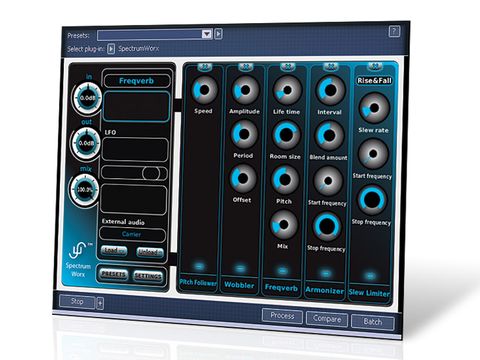 Effects don't get much more mayhemic than this, although Little Endian has missed a few tricks in this current version.

SpectrumWorx 2 is an ambitious multieffect plug-in with a few features that make it stand out.

The first point of difference is its modular design. The nine effect categories house a total of 55 unique modules. These aren't mere presets but 55 individual effects, with which you can cook up a recipe for intentional audio disaster.

You can stack up a maximum of five modules and reorder them until you're satisfied. With so many modules to choose from, you'd be right in concluding that most of them are quirky and unconventional, which brings us to the second point of difference.

SpectrumWorx 2 is a spectral processor. In simple terms, that means that instead of processing the audio as a waveform (ie, based on time and amplitude), it manipulates the spectral content of the audio - the frequencies that constitute the sound.

Most of them can be targeted at a specific adjustable frequency band, so you can confine each process to a fine detail within the sound you're working on.

Does it really worx?

SpectrumWorx 2's output resides in the realm of wacky, quasi-futuristic effects and glitches. It pulls this off remarkably well, although you should be aware that more than half of the effects produce sounds that are so far removed from the original source that they're unrecognisable.

Clearly, this isn't a plug-in intended for subtle processing, and this notion is reinforced by some of the wackier effects having names like Sumo Pitch, Wobbler, Imploder, Exaggerator, Talking Wind and Burrito.

Many of the more unusual effects make use of an auxiliary audio signal. Depending on the module in question, this can be used as a carrier signal to drive vocoder-style effects and the like.

External audio can be routed in by panning tracks hard left and right (for mono signals), routing into an extra pair of inputs (for stereo), or by loading an audio file via the interface.

These methods work, but there's no VST3 version with built-in sidechain support, and you can't send audio from one instance of the plug-in to another. This is a bit of a letdown as the sidechaining is a good idea that could really stand in SpectrumWorx 2's favour.

You'd hope, then, that loading external audio files would be a bit easier. However, the plug-in won't load 32-bit or unpacked 24-bit files, and every instance (and indeed, every module) shares the same sample, which is a bit rubbish.

There's an elephant in the room!

One of the cooler features in SpectrumWorx 2 might be its LFOs. Their rates go from 100ms to 10,000ms, and there are a good selection of wave shapes to choose from.

As well as the common synthesiser types, there's Exponent, like a pinched triangle; htootwaS, a reversed sawtooth (geddit?); and Random, which we reckon is essential for such a far-out plug-in.

There's also a Range control on the LFO, so you can set, say, a Delay time between 17ms and 500ms or a pitch range from -48 semitones to +48 semitones. It's all great fun and every parameter that you might want to modulate has its own LFO.

But wait! There's a huge drawback: you can't synchronise the LFO to the host or to any kind of tempo whatsoever. It's totally free running, which is a big disappointment.

Little Endian say that LFO sync is a "top priority" for v2.2. Very glad to hear it!

Even so, it's hard not to enjoy playing with SpectrumWorx. The challenge is in getting your head around 55 unique effect modules and then getting a usable sound out of them.

We say this is more likely to be a go-to plug-in for reckless experimentation rather than one for cold and calculated edits. Mac users will be pleased to hear that an OS X version is imminent.