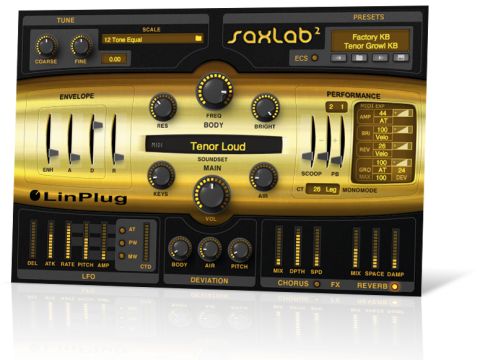 The original SaxLab was a software instrument that, with a bit of work on the user's part, was capable of producing not just decent saxophone sounds (of the soprano, alto, tenor, bass and baritone variety), but also a pretty good approximation of a flute.

In truth, it's never really been bettered, but that hasn't stopped LinPlug from attempting to deliver some improvements in this update. For the most part, SaxLab 2 sticks to its predecessor's successful blueprint, but adds a number of features that are designed to lend a breath of fresh air to your projects.

This is a sample-based plug-in, and sounds - which are monophonic - are produced using three layers: Main deals with the pitch, Keys emulates the sound of the saxophone's metal keys being played, and Air covers breath and airflow sounds. You can balance the levels of these layers in SaxLab 2's interface.

Next up is the Body section, which contains a filter that modulates the sound using an envelope, an LFO and real-time MIDI controllers. There's also a Deviation setting, which ensure that every note sounds subtly different - as they would if they were being played by a real saxophonist.

Then there are chorus and reverb processors, a tuning section and an easy-to-use MIDI Learn system.

At first glance, little seems to have changed on the SaxLab interface, but investigate a bit more thoroughly and version 2's improvements reveal themselves.

In the Envelope section, the Velocity to Envelope control has been replaced by an Enhance control (this adjusts the attack transients of notes), while the Volume, Keys and Air controls are now routed in parallel.

The Performance section, meanwhile, has been totally redesigned, and offers many more control sources and destinations to increase realism.

The Growl effect is a welcome addition, while the LFO boasts a new waveshape and a better attack characteristic.

In the Deviation section, there's a dedicated control for the Air parameter, while there's an improved Reverb algorithm in the Effects menu. Finally, the microtuning system now supports TUN files, and LinPlug has included its preset management system.

SaxLab 2 doesn't look or feel like a massive update, but then it didn't really need to be. The improvements in this version aren't exactly eye-catching, but should please both new and existing users.

The supplied presets sound pretty good out of the box - it's possible to get some really beefy growl in the lower registers, while soft, sweet top-end tones are also easy to produce - and if you spend some time getting to know the more advanced features of the software, the results get even better.

While we can't really recommend using this plug-in for solo performances, it's a winner when employed as part of a mix. It's also refreshing to find a 'real instrument' emulation that doesn't require you to install a huge amount of sample files before you can use it.

SaxLab 2 is undoubtedly a specialised product - casual fans of the instrument will enjoy using the presets in their ROMpler of choice - but if you need to use saxophone sounds regularly, it remains an excellent buy.

Check out some of SaxLab 2's presets: