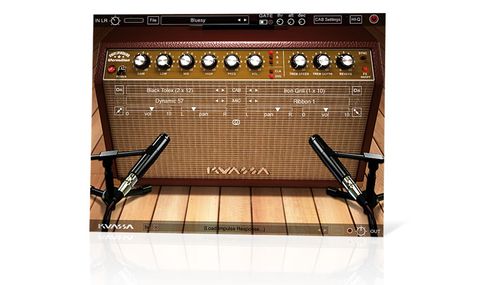 Sonically lifelike, easy to use and incredibly good value, Amplifikation Vermilion is a real winner.

If you've ever used the plugins packaged with Computer Music magazine, you may already be familiar with the guitar amp emulations of Kuassa, thanks to Amplifikation CM. Amplifikation Vermilion is, in fact, an evolution of CM's own free combo amp modeller, expanding on each of its elements to give you much more tone-shaping power.

The design and layout couldn't be more intuitive - it puts you standing in front of the amp, and what you'd do to a real amp is more or less exactly what you do to this virtual one. Being able to switch the cabs and mics via a drop-down menu, of course, makes things easier than they would be in real life.

Vermilion's general combo amp sound is tighter and punchier than those of Kuassa's other two plugins, those being Crème (aimed at catering to the big rock sound) and One (which includes foot pedal effects and delivers a more 'cover-all' sound).

Vermilion is built to suit the bluesy 'British' and clean country sounds, and its three amps aren't modelled on any specific hardware, being more generic in their approach, with a choice of Tube, Solid State and Clean.

The Tube amp has the warmth and fatness you'd expect from such a thing, as well as the bite, although it could deliver a bit more grunt when driven. The Solid State amp is tighter and punchier, with a great attack. The Clean amp comes third in the table, and it doesn't really keep up with the other two - you can actually get a much better clean sound from either of its bedfellows.

There are four tone controls on the amp: Low, Mid, High and Presence. These are joined by Gain and master Volume knobs, with which you can dial in your desired amount of drive. On top of that, you're given a choice of cabinets and mics along with control over their relative positions. Of the five cabs, three are really good. You can run two cabs in tandem, either in mono or stereo; in the latter mode, each can be panned, and they can also be put out of phase.

The four mics comprise dynamic (emulations of the Shure SM57 and Sennheiser 441), condenser (Studio Project C1) and ribbon (Crowley Tripp Naked Eye) types. The dynamic mics are pretty good, but the condenser is a bit on the thin side. The ribbon, however, is ace.

As with real amps, a lot of Vermilion's sound- shaping potential is down to mic positioning, and here you can drag the mics forward and back and from side to side, as well as putting them on and off axis, shaping the tone to great effect. Ideal additions would be a more distant ambient mic with a choice of rooms, and perhaps a phase-inverted mic on the rear of the combo for extra 'oomph'.

What really makes Vermilion stand out is the breadth of subtle tones you can coax out of it. Its ranges aren't so extreme, so you can be quite precise with the controls without the amp suddenly going from soft to harsh. While such subtlety could be taken as a lack of sensitivity in other plugins, it works well for Vermilion because it's basic tone is so good.

So many amp sims try to cover too much guitar ground and end up being jacks of all trades. Amplifikation Vermilion sticks to the straight-up combo concept and thoroughly represents its nuances. Both the Brit and Country sounds equally embrace this style, and Kuassa have done well to create something that really delivers for both - and bang on budget.