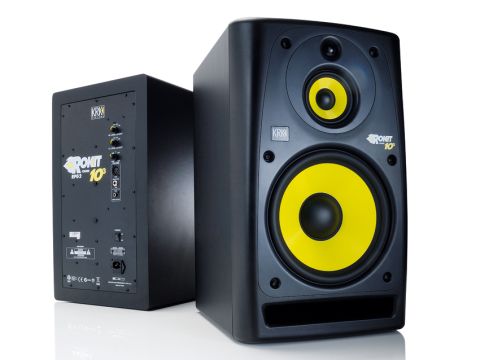 Home studio owners are spoilt for choice. KRK is just one of the many manufacturers that have flooded the market with accurate, revealing near-fields at attractive prices.

"The RP10s are highly capable monitors that compete favourably with products twice their price."

The RP10s bear significant similarities to the rest of KRK's Rokit range, featuring front-firing ports, a vinyl-coated MDF enclosure, glass/aramid low-frequency driver and a one-inch soft dome tweeter. The major difference is the presence of a third driver; where the rest of the Rokit range are two-way designs, the RP10s are a three-way design with a 10-inch woofer and 4-inch mid-range driver.

For our test I borrowed a pair of RP8 G2s in order to make a direct comparison. The difference in physical stature between the two monitors is obvious, and on setting them up together and trying them side-by-side it's clear that the sonic difference is equally dramatic.

The RP10 is significantly better in every respect: the bottom end's tighter and deeper, there's no honkiness from the port at any listening level, the mid-range is more detailed and transparent, and the top end is smoother and more revealing. The RP10s don't sound hi-fi in the hyped, flattering sense, but there's an enjoyably involving character to the sound that's missing from the smaller models.

The RP10s' low-end frequency response is seriously deep, with a bump at around 40Hz followed by a gentle roll-off down to the -3dB point at 31Hz. Needless to say, you won't need a subwoofer with these.

Strangely, KRK has chosen not to offer acoustic space settings to tame the bottom end. Instead, you'll have to make do with adjusting the LF level switches, but the maximum of 2dB low frequency attenuation might not be enough to compensate for placement near a wall or other equipment.

Soffit mounting is also out of the question, but horizontal placement is made possible thanks to a rotating sub-baffle which houses the tweeter and mid.

Given that most of the competition costs at least twice as much as the RP10s, it's inevitable that there must be compromises in the design. Like the smaller monitors in the Rokit range, the frequency response of the RP10s isn't the flattest we've ever heard.

Likewise, they certainly aren't the most powerful three-way design you'll find, with a 30W class A-B amplifier for the highs, 30W for the mids and 80W for the bass. Even so, they're relatively efficient and there's plenty of clean power before the amps break up.

The RP10s are highly capable monitors that compete favourably with products twice their price. Whether as a near-field with an incredible low-end response or as a dedicated mid-field to supplement an existing pair of monitors, I see no reason why they won't be popular with producers working in absolutely any genre.

Our only major concern stems from their size and imposing bottom end. The list price of £1,098 is likely to translate to a street price just over £800, and by pitching such a large monitor at a project studio-friendly price, KRK runs the risk of attracting customers whose rooms really aren't big enough or sufficiently treated for the RP10s to work properly.

That's not a criticism of the monitors, per se, but a warning. Assuming your room can handle them, the RP10-3s have to be considered an attractive option at this fantastic price.