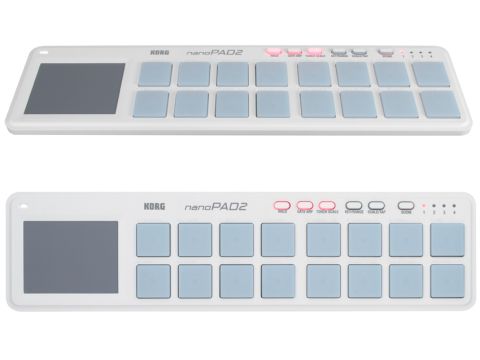 The new hardware looks and feels better, though some may be disappointed that certain features have been left behind.

Korg now returns fire with the nanoSeries 2, which comprises three units. All are USB-powered class-compliant MIDI devices, meaning that you just plug them in and off you go - no need for drivers or external power supplies.

A sleeker and more rounded-out design makes the devices easier on the eye and in-keeping with the current trend for softer aesthetics.

The original nanoPad pleased us greatly with its sturdy, responsive drum pads. They've grown in number from 12 to 16, with a slight separation down the middle, effectively presenting them as two banks of eight.

The Flam and Roll buttons have been replaced with Gate Arp, Touch Scale, Key/Range and Scale/Tap options. These are performance-oriented controls for use in conjunction with the excellent X/Y pad.

In its standard mode, the X/Y pad transmits CCs; in Touch Scale mode, the X axis instead sends notes while the Y controls note length. Thus you can play musical patterns and phrases, much like on Korg's Kaossilator series.

Scales and keys are accessible via the Key/Range and Scale/Tap buttons - while holding one of these down, you can select notes and scales by pressing the pads.

Gate Arp creates rhythmic 'gated' notes at a specified tempo (set via tap tempo or synced to MIDI). You hold a pad and use the X/Y pad to control the rate - ideal for glitchy effects or basic drum rolls. By engaging Touch Scale mode, you can play gated melodies on the X/Y pad.

There are four bank select buttons, making a total of 64 'virtual' pads. With each able to trigger up to four notes at once (ie, chords), the nanoPad has melodic potential aplenty.

The full feature-set of the original nanoSeries could only be accessed via the Kontrol Editor software, and this is still the case. There are a few changes for the new devices, though.

On the nanoPad, each pad can send four notes, CCs or program changes, as opposed to the original's eight. Per-pad options to determine whether a pad is included when using the gated modes. The X/Y pad can also be assigned as you like, although this is now global and not per scene.

Note that you can download the Kontrol Editor before buying a nanoDevice to get a feel for its mapping possibilities.

The original nanoSeries turned out to be nifty companions for Apple's iPad, and this holds true. Apps that support Core MIDI (eg, GarageBand and Akai SynthStation) should work just fine.

Korg's own iElectribe and iMS20 apps sport a 'nano 2 native' mode, which will assign the controls appropriately when you plug in a nanoPad. Just be sure to disable this if you want your custom mapping to remain!

Some decent new functionality and a gentle makeover sees the nanoSeries heading in the right direction. However, fans of the first nanoSeries might be annoyed that certain features have been ditched to make way for new ones, rather than the existing feature-set being expanded.