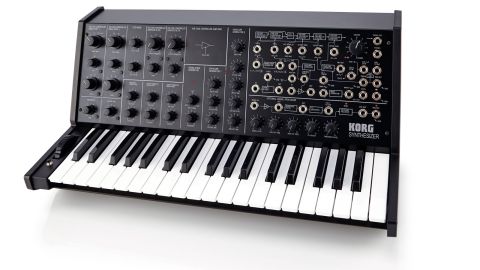 It's fun to build, has big keys and MIDI and includes both MS-20 filter revisions. Grab one quick!

As great as last year's Korg MS-20 Mini was, many folks prefer a full-size keyboard and now their prayers have been answered with the MS-20 kit!

Finally we have a full-size 1:1 MS-20 clone which looks exactly like the original - though the eagle-eyed amongst you will spot the addition of a power LED which is handy, especially as there's no way to tell if an old MS-20 is on until you play a note on the keyboard!

Of course, the MS-20 kit is also a bit shinier but apart from that it looks exactly the same. As the MS-20 kit functions in exactly the same way as the MS-20 mini (with the exception of the additional filter types onboard), let us refer you back to our MS-20 mini review (http://www.musicradar.com/reviews/ tech/korg-ms-20-mini-574164) for a deeper look at the functionality on offer. For this review we're going to concentrate on build and sound.

The MS-20 kit is a limited edition of just 1,000 units worldwide (rumour has it only 100 are being allocated to UK retailers) and it arrives in a large authentically '70s-looking brown cardboard box with all the major parts boxed and bubble-wrapped separately inside. You'll find a keyboard, plastic end panels, shielding stickers and metal case panels, plus a shedload of screws, nuts and washers. There's a spanner included for tightening the nuts on the front panel but apart from that all you'll need for assembly is a crosshead screwdriver and some nimble fingers!

Assembling the MS-20 kit is pretty straightforward and takes around three hours - you start with the metal chassis, then fit the keyboard and the side panels. Next, you add the circuit boards for the filters/oscillators, the patch panel, the ESP and finally the power/MIDI board, though it's a shame that the MS-20 kit is powered by a wall wart considering how much space there is inside the case for an internal power supply, but there you go!

The most tedious part of the build is adding the 70-plus panel nuts that sit under the dials and that surround the jack sockets on the patchbay and ESP. They're fiddly and monotonous to fit but fortunately that's as bad as it gets.

Everything goes together very nicely and the fit and finish is great in the main, though the screw holes on the back panel of the review model didn't line up correctly with the mounting brackets, so it took a bit of messing around to get the screws in.

Rest assured though, even somebody with rudimentary screwdriver skills can put together the MS-20 kit and thankfully there's no soldering involved either; the closest you'll get to being an electrical ninja is clipping the ribbon cable connectors to their respective boards!

Once the kit is built (and you've stopped marvelling at the beautiful synth you've just built), switching on and experimenting is both fun and addictive. Build quality is considerably sturdier than the MS-20 mini, though of course the MS-20 kit is around £580 more, so you'd expect a big jump in quality.

The majority of the knobs feel tighter than our original MS-20, though the waveform selector knobs are a little easier to turn which is much better for those that like to flick quickly through waveforms when performing.

The full-size keyboard feels much nicer than the one on our original MS-20 too - it feels more cushioned when the keys bottom out and it's much less noisy and clanky. All things considered, the hardware is top-notch and it's certainly great fun putting the kit together.

In every other respect the MS-20 kit is faithful to the original MS-20, so there are two oscillators, two envelopes, two filters and some pretty extensive modulation options for making all sorts of bubbles and squeaks.

The MS-20 excels at making resonant and screaming sound effects but it's also great for making solid analogue drum sounds too as the envelopes are pretty snappy and the range of the filters is huge.

Of course, it can also make hugely characterful/subby basses and soft or edgy leads but certainly, there's nothing quite like turning up the peak on both filters and letting the madness ensue! It's the inspiring unpredictability of the filters and the way the sound breaks up at extreme settings in particular that makes the MS-20 such a versatile and characterful synth.

Plus, now that both the earlier and later filter types are onboard together, the sonic palette has been extended beyond that of any previous MS-20s. This was a very clever move by Korg and essentially you're getting a 'best of' model that stands out from the rest in this respect.

Since the MS-20 mini came out there has been concern from some users that it suffers from a background noise/hiss issue. We're happy to report that the MS-20 kit has no noise issue and, putting it alongside an original MS-20, it seems clear to us what's going on.

The original MS-20 is fairly noisy anyway and the noise/hiss is most apparent when using softer waveforms and closing down the low-pass filter. The MS-20 kit exhibits this same behaviour but, as it has a hotter output signal and because the filters open much brighter too, the noise in the circuitry becomes a little more prominent - though we're convinced this isn't an issue as such and just an inherent part of the MS-20's sound.

Whether this differs between units remains to be seen but we can say that the noise certainly isn't an issue on the review model.

As good as the original?

You can't quite get that mid-range growl and extreme creamy distortion when pushed hard but otherwise we have no complaints. The envelopes even feel slightly punchier on the kit compared to my original and the pots don't crackle either which is great!

The MS-20 kit is as close to the original as you can get and the addition of MIDI, plus the brighter high-end, add much to its appeal. Some may feel it's a little pricey when you have to build it yourself but then it has the two filter types onboard and it's sturdier than the mini.

If you've always wanted an MS-20 but not the headache/cost of maintaining an original then we recommend grabbing one before they're all spoken for.