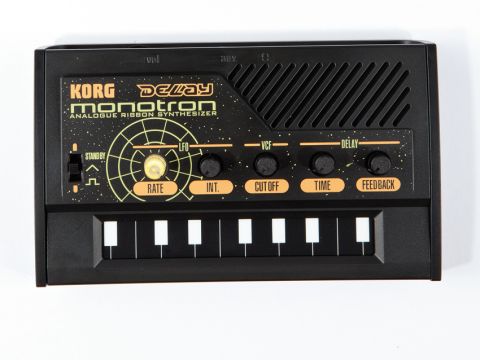 An FX monster with a great delay section. A shame about the filter's fixed resonance.

The music world was taken by surprise in 2010 when Korg announced the release of a new pocket-sized synth. Could this really be Korg - committed digital hardware manufacturer - releasing its first new analogue synth for nearly 30 years?

Even more surprisingly, was such a forward-thinking company really basing parts of the circuitry on designs found in their MS-10 and MS-20 synths of the 1970s? The hype turned out to be true and - despite its quirks - we loved the original Monotron, fiddly ribbon controller, noisy output and all.

"For such a simple unit, there's a surprising range to the effects which can be created and the results are excellent."

The Monotron synth engine was included in this year's Monotribe groovebox, suggesting that Korg was gradually working towards something bigger and even more impressive, so it came as another surprise when it was announced that two new models were being added to the Monotron range, the Duo and Delay. Korg obviously isn't quite finished with its analogue heritage just yet.

The Delay is based on the same form factor as the original, right down to the position of the five knobs and three-way slider switch on the front panel. Both Duo and Delay feature the same basic setup - ribbon controller, integrated speaker, headphone output, auxiliary input and compartment on the back for the supplied pair of AAA batteries.

The differences start to become apparent when you check out the controls. The Duo (blue case, regular keys) adds another oscillator and a cross-modulation control to the original Monotron design. Meanwhile, the Delay (black case, reverse keys, funky Sci-Fi paint job) adds an analogue-style delay circuit.

The Monotron Delay's name should immediately give away its unique selling point. The main attraction here is that Korg has crammed a small but perfectly formed delay circuit into the Monotron's case, but there are a number of other small changes.

The VCO produces the same reverse sawtooth wave as the original Monotron, but the LFO now offers a square wave in addition to the original model's standard triangle. The LFO is used to modulate VCO pitch and can't control filter cutoff.

The four-octave range of the ribbon means that the Delay is practically impossible to play melodies on with any degree of tuning accuracy. This version of the Monotron seems to be designed specifically for FX, with the analogue-style delay circuit playing a major role in sculpting the sound.

Delay time is adjustable from a few milliseconds to around one second. The feedback control can effectively bypass the delay at its lowest setting, but turning it up moves gradually from tight slap-back echoes to dub-style spacey, never-ending repeats.

With the delay time at its shortest setting and feedback around half way, the unit can even produce a twangy sound similar to a spring reverb. For such a simple unit, there's a surprising range to the effects that can be created, and the results are excellent.

A quick look inside reveals that the delay is based around Princeton Technology Corporation's cheap PT2399 echo processor chip. In true Monotron style it's not particularly quiet, with high feedback settings resulting in a rising swell of white noise along with the signal, but for a special effect tool it's not really a problem.

Plenty of old analogue delay units are noisy, and it didn't do them any harm. If you're looking for clean delays, the Monotron's not for you, but you'd be missing the point. This is meant to be dirty and nasty. The auxiliary input will even enable you to add a bit of filth to external signals.

Surprisingly, the one weakness of the Delay is its filter section. The feedback control feeds the delayed signal back into the filter for extra tone shaping before it hits the delay circuit again, but the only adjustment comes in the form of a cutoff control.

Given that the MS-20-based low-pass filter was the main selling point of the original Monotron, it's very surprising to find that the version included on the Delay omits the 'peak' (resonance) control. The MS filter really comes alive as the resonance gets cranked up, turning from a mild-mannered tone shaping control to a self-oscillating monster at higher levels.

The only logical reason I can see for its absence is that the Monotron front panel and PCB are designed for a single slider switch and five rotary pots. Adding resonance to the Delay's filter would therefore mean ditching one of the other controls or retooling to produce an entirely new case and PCB design. It's a real shame it's not adjustable as standard, but I have no doubt that the modding and circuit bending communities will come up with a solution before too long.

I'm absolutely certain that Monotron owners will decide to add one or even both of the new models to their collection. The Delay is the more immediate of the two units, but gets marked down slightly on versatility since it's really a dedicated FX box.

At a bargain RRP of £42 for either of the new Monotrons, or last year's original unit, these are great value.

Our only real complaint is with the way Korg are drip-feeding us new features with successive Monotron and Monotribe releases. The company now has four different analogue devices on the market, each with slightly different feature sets.

We know Korg can make stable analogue oscillators, awesome MS-style filters, step sequencers and analogue drum circuits, so doesn't it make sense to bring all those ideas together in the same unit? Modders will relish the idea of hacking Monotrons and Monotribes together to create insane custom synths, but the rest of us are desperate for Korg to cram all that technology into one box and release the brand new analogue synth we suspect the company's hinting at.

So, Korg, what's it going to be next? Polytron? Drumatron? Or Monotron Pro? We can't wait.