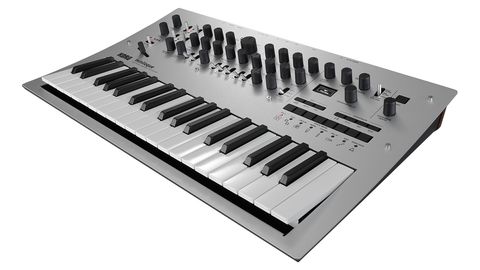 We're not sure how Korg has pulled this off for the price but the company has nailed it. The Minilogue even gives more expensive synths a serious run for their money, and is pretty much an essential purchase.

Believe it or not, Korg hasn't released a keyboard-equipped analogue poly since 1985's DCO-driven Poly-800 MK2. With the current resurgence of all-things-analogue, though, it was only a matter of time before the company got back into this particular game.

While Korg has been perfecting its analogue tech with the re-release of the ARP Odyssey (duophonic) and its super-cheap Volca Keys desktop module (3-note polyphonic), many of us have been trying to predict what the company would do next. Well, now we have the answer and it's called the Minilogue - an all-new, 4-voice analogue polysynth priced at less than £500.

As already mentioned, the Minilogue has 4 voices, so you can play up to 4 notes simultaneously. If you exlucde Akai's 2-octave, 4-voice Timbre Wolf at £299, we can't think of another analogue synth at a similar price point that offers this facility There's a significant jump in price up to DSI's Mopho X4, the Elektron Analog Keys and the Roland JD-XA (all DCO, not VCO). Consequently, the Minilogue has the potential to own the lower-midrange poly-analogue keyboard market.

Straight out of the box, the build and looks are impressive. The front panel is fashioned from 2mm sand-blasted anodized silver aluminium, which feels tough and is nicely contoured/textured, whilst the chassis is constructed from tough/lightweight plastic with a Pyinkado wood back panel (a South Asian tree known to have very durable properties). This finishes off the Minilogue's future/retro vibe nicely.

There are 14 metal 'paddle' switches (like a '70s music centre/'80s video recorder!) and 29 black plastic dials on the panel. These all send/receive MIDI and feel very sturdy indeed due to their metal shafts, underlining that Korg has designed the Minilogue to last going forward and not just to meet a price-point. In fact, the Minilogue feels more 'premium' than many of the more expensive synths we've tested recently! (Note- you can remove/swap the dial caps for something a little more blingy if you so desire).

You'll notice there's a small, perfectly-formed OLED display on the right - this displays patch names, parameter values/changes, four sequencer 'motion' lanes and a handy real-time oscilloscope so you can 'see' your sounds. It also helps you navigate program/sequence/global settings in combination with the eight red-backlit function/Voice Mode buttons underneath. These double as sequencer step and editing/page buttons. Reassuringly, for general sound making and sequencing you don't need the screen at all - just your ears/fingers!

Connection-wise, the Minilogue runs off a wall-wart (expected at the price point) plus there's a full-size mono-jack output (use the headphone out to run split-mono/pseudo-stereo) a mono audio input which runs through the filters, envelopes and delay too (fantastic news!) plus USB (MIDI only), full-size DIN Midi In and Out and Sync In/Out minijacks for interfacing with other Korg Sync-equipped gear (along with other third-party equipment that can read or send 5V pulse signals).

Two of the Minilogue's greatest assets are its small footprint and 2.8kg/6lbs weight - these have been made possible largely because of Korg's familiar 'SlimKey' keybed, as found on its ARP Odyssey, MS-20 Mini and RK100S keytar. However, unlike the Oddy, the Minilogue is velocity-sensitive, though it doesn't receive or transmit aftertouch.

Whether you're a fan of downsized keybeds or not, it's fast/enjoyable to play, and when you consider that the Minilogue will fit into a very compact case that you can easily take onto a plane as hand luggage, any reservations about it are soon firmly quashed - this will likely be the perfect form factor for many gigging/touring synth players.

You'll also have noticed that there are no pitch and mod wheels. Instead, there's a sprung and centre-detented angled slider which can be assigned to 29 destinations including pitchbend, filter and LFO, though only one destination at a time currently. We hope Korg can implement an OS update asap so that you can assign a separate destination to each side of the slider's centre position for quick-flipping between pitch/mod duties.

Regardless, the slider is very expressive. The bend range can be set independently either side of centre, and you can easily perform very fast/fluid/accurate pitch wobbles and bends with it.

Power on the Minilogue and you're greeted with a 'tuning' screen whilst the oscillators warm up, and the Minilogue is ready to go and stable in about 10 seconds (you can even play a little game of on-screen bat and ball as you wait)! At its heart are eight lively-sounding analogue oscillators (two VCOs per voice), each with saw, triangle and square waves. There's also a square wave sub-oscillator available in Mono Mode (via the Voice Mode Depth dial) which sits one or two octaves below Osc 1.

All the oscillators sound rich and full and you can really hear that these are VCOs and not more controlled-sounding DCOs. In addition, each wave has a continuously variable (and modulatable) shape, making the Minilogue a surprisingly powerful/versatile sonic toolbox. You can go thin, fat, evolving and anywhere in between, and we're seriously impressed by the huge range of timbres that are available using the eight available Voice Modes (more on these shortly) and some shape modulation.

You can make deep, subby and growling basses, a great Wurlitzer-style EP, wah Clav's, rich evolving pads, cutting leads, huge stacked unison sounds and MS-20-style FX and bleeps. In fact, it's scary how so many different types of sound just drop out of the Minilogue with little effort, and it's a good job there are 200 locations to store your patches and sequences. The Minilogue is just so inspiring.

Notably, the presets are also decent and there are eight 'favourite' locations for quickly recalling patches, too.

Also available is a chunky-sounding white noise oscillator (which comes in handy for making sound effects and snares) and a single, MIDI-syncable LFO that's capable of audio-rate modulation. Having a dial per function and such a well thought-out/flowing interface is a godsend, too, making sound making extremely pleasurable. The only other function we wish had a direct dial is portamento, but it can be set up quickly enough in the menus and set only to trigger when playing legato.

Poly allows 4-voice chords with VMD dialling in inversions of the chord you're playing (great for instantly spicing up chord sequences). Duo Mode turns the Minilogue into a 2-voice poly, with 2 oscillators per key played and detuning via the VMD dial. Unison stacks all the voices together for a massive sound (great for trance/electronica), again with detuning via the VMD dial. Mono Mode is a classic monosynth mode, with VMD acting as a sub-oscillator level control for adding low end, weight and growl to your monophonic sounds. Chord Mode turns the VMD dial into a chord selector where chords are triggered by a single key press - very handy for quickly coming up with chord sequences. Delay Mode allows each voice to be triggered in turn, with VMD varying the delay between voices. Arp Mode turns on the 14-mode arpeggiator (MIDI-syncable but currently not latchable).

Finally, Sidechain Mode lowers the volume of any already-played voice when a new one is triggered - there's plenty to work with and it's certainly fun switching between the modes during live performances, too.

Each program has its own 16-step (with realtime-overdub) sequencer which sends MIDI out and can record polyphonically. The sequencer is a handy ideas scratchpad and an addictive evolving looper too, particularly when you start recording dial (motion) tweaks. (Note: there are four separate 'motion' channels/lanes for recording dial tweaks).

Sequence/note length and gate time can all be customised and there's adjustable swing, too. Currently there's no sequence transposition via the keyboard (as on the Sequential Prophet-6/ Moog Sub-37) but with Korg's expertise, we're hopeful that this can be added ASAP via an OS update. Notably, when MIDI-clocked from our DSI Tempest/Logic, the Minilogue's timing was rock solid.

Modulation-wise, there's loads to mess-up or subtly massage sounds, including the audio-rate-capable LFO with three waveshapes, cross-mod, ring-mod, shape-mod, PWM, sync, pitch-mod, the assignable EG and white noise - all of which can be tweaked directly via the panel (or via MIDI).

Last but not least, the characterful delay is indispensable, and can add reverb-like ambience and/or distorted atmospherics. It's stored per patch and can be placed pre/post-filter, too. The included high-pass filter is also very welcome, winding out lows from the delay repeats (or the Minilogue's overall output) and we love that delay tweaks can be sequenced, too.

The Minilogue's architecture is really versatile, which makes it stand out even against pricier competitors. It generally produces a very high-quality sound, though it'll do dirty/hissy when you really crank the levels through the mixer, push the delay or use the cross mod/sync and ring mod. It's unmistakably Korg-sounding (almost like a polyphonic MS-20 at times), though it's warmer/deeper and more refined, whilst simultaneously sounding edgy/progressive.

The filter can also be velocity controlled/keyboard-tracked and has 2- and 4-pole modes which have nicely different resonant characteristics, adding much to the overall versatility. The 4-pole is smoother/darker while the 2-pole is brighter/more lively/biting, but both sound sweet and the resonance on both types is great for making kicks/hats.

We also found the envelopes to be pleasingly snappy (perfect for punchy leads, basses and drum sounds) and the second ADSR can be used as a general envelope and assigned to the filter and/or other parameters including LFO rate/intensity.

Couple all this to the onboard 16-step polyphonic sequencer, the arpeggiator, the aforementioned audio input for processing external audio, the very tape-like delay, plus patch storage and MIDI, and the Minilogue will surely fly off the shelves- you have to keep reminding yourself how reasonably priced it is is and just how much goodness it packs into its compact form factor.

It's been a long time since I was this surprised/inspired by a synth and we're sure it's going to stir things up in the synth world. Game-changer? Absolutely.