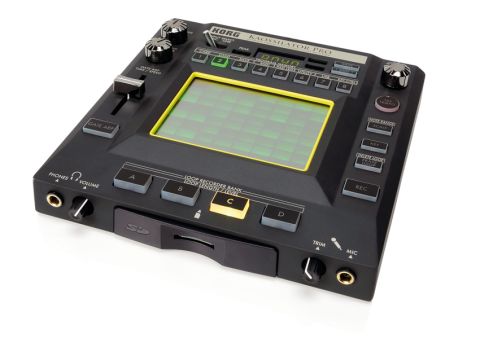 A big improvement on the original Kaossilator, the Pro version gives you a great new way of making music.

When we reviewed Korg's groundbreaking Kaossilator, we loved its innovative approach to creating loop-based music and hoped that it might spawn a bigger follow-up.

Three years down the line, Korg has granted our wishes with the introduction of the Kaossilator Pro (KO-Pro), a much-improved version that offers a variety of new features and looks all set to build on the success of the original KO-1. Yusss!

Pulling the Kaossilator Pro from its box, it's immediately apparent that this is a far more substantial unit than the original version. The form factor is almost identical to that of Korg's Kaoss Pad KP3, with an all-metal construction and a bigger overall footprint giving the Pro a much more weighty, well-built feel than its predecessor.

One side effect here is that the Pro is less portable, requiring DC power from a mains adapter. Retaining the ability to run on batteries would have been a bonus, but Korg's promotion of Pro as a studio and live performance tool suggests that it simply isn't intended to be a mobile device like the original Kaossilator.

The layout of the KO-Pro will be familiar to anyone who's used the KO-1, but a series of key differences reflect the new features on offer. The large X-Y touchpad is backlit, as on the KP3, and the gate arpeggiator has a new dedicated slider and button. A quick glance at the connections reveals an extra pair of RCA sockets and a mic input for capturing external sounds and using the vocoder.

As if that wasn't enough, the Pro features MIDI In and Out, an SD card slot and a USB socket to link it to your computer.

The Kaossilator Pro is pleasingly intuitive despite a number of small changes to the original workflow. The four large buttons below the X-Y pad represent four separate loop locations, allowing complex multi-layered patterns to be built up with ease.

During playback, each of these pads allows parts to be quickly muted, assigned for recording or erased using the function buttons down the right hand side of the unit. The levels of loops can also be adjusted using the new mixer feature, allowing four-part sequences to be tweaked on the fly.

A few features from the mini KO have been omitted in the new version, with the lack of an undo function in particular necessitating a slightly different approach to working which may not be obvious to existing Kaossilator users.

All 100 programs from the KO-1 are included and supplemented by 100 new patches replicating everything from vibraphones to MS20 leads. Sliding your finger horizontally on the pad controls the pitch according to your chosen key and scale but most patches also offer a degree of expression control via your finger's position on the vertical axis. Typically, moving your finger higher up the pad will control a variable such as filter cutoff, vibrato or the mix of a delay or reverb effect.

Unfortunately, it's not possible to choose which of these variables you control, hampering the flexibility of most of the programs and effects. Nor is it possible to control these variables from an external controller. We'd like to have greater control of the Pro's synth engine, even if it was just the ability to assign the vertical axis of the pad to different variables. It seems a shame that the Kaossilator hardware itself can create so many usable sounds but your tweaking options are restricted.

Owners of the original Kaossilator will be used to its preset-based gate arpeggiator and may be surprised to find that the Pro uses a different system. Inspired by the arp on Korg's Electribe and controlled using the dedicated slider and on/off button, the new gate arp abandons the presets entirely. This system is much more flexible and the arp is easily adjusted with the slider, which can be assigned to gate speed or time. A somewhat inconveniently placed switch round the back of the unit allows you to flip between the two.

The final big new feature of the Pro is the ability to record and manipulate external audio through the line or microphone inputs. Audio loops are automatically synced to the Kaossilator's tempo, making it easy to timestretch external sounds to match your synthesized parts.

The option to record audio is handy in itself, but the Kaossilator's abilities extend beyond basic looping of external sounds with the inclusion of a bank of 15 effects programs. These allow you to manipulate external audio using effects such as a filter, delay, pitch shifter, looper or vocoder. The vocoder is particularly fun, with the X-Y pad offering excellent hands-on control of the modulation. Although a KP3 or even mini-KP contains more effect processing power, the KO-Pro's effects certainly add another string to its bow and increase its potential further.

The Kaossilator Pro's backlit touchpad is larger than that of the KO-1 but still only responds to a single finger. Trying to touch the pad with two fingers results in the Pro getting confused and finding the centre point of the pair.

In the era of the JazzMutant Lemur and even Apple's iPhone, the KO-Pro is in danger of being left behind by multitouch-equipped music controllers. In the same way that the iPhone's multitouch capacitive screen revolutionised the world of mobile phones, a multitouch pad on the Kaossilator would instantly open up a whole host of new features.

Most obviously, multitouch could unlock the polyphonic potential of the Kaossilator, allowing you to play chords live rather than creating them by layering notes over each other. In fact, why not take it a step further and integrate multitouch swipe gestures as featured on the latest laptops? Imagine the possibilities for a Kaossilator which knew how many fingers you were using and could respond differently for each number…

MIDI compatibility was one of the main features we thought would improve the Kaossilator, so the arrival of MIDI ports on the Pro got us seriously excited. Unfortunately, there are a couple of major omissions from the KO-Pro's MIDI implementation.

Firstly, it doesn't support standard note data. The X-Y coordinates are instead sent and received as CC values, meaning that if you want to play the internal synth instruments using a MIDI controller or DAW you'll need to find a way of converting notes to CC.

Luckily this isn't too difficult to achieve. MIDI utilities such as the excellent freeware MIDI-OX (Windows only) or the wacky but powerful Plogue Bidule (Mac and Windows) allow note messages to be remapped to CC values, making this process relatively simple. What's more, most DAWs offer MIDI mapping options which can carry out this task for you. It might not be as easy, but the neatest solution could be to set up a MIDI environment which automatically maps notes to the CC values the KO-Pro expects.

If there were a simpler way for the Pro to be triggered by note data, though, it would allow greater control of instruments and make it more flexible for live performance.

The second flaw in the MIDI setup stems from the fact that the KO-Pro will match the tempo of an external MIDI signal, but it won't actually lock its beats to the external clock, making it unnecessarily difficult to sync the Kaossilator to other devices.

Overall, the Kaossilator Pro's MIDI functionality seems like a missed opportunity. The ability to trigger notes from external controllers and sync with other devices have both been fumbled slightly. It does, however, enable you to control other synths with its touchpad through External Control Mode, but the KO-Pro's synth and looping is disabled in this mode.

In terms of further connections, the Pro's SD card slot allows you to save your loops and settings for later recall, which is sure to be a welcome addition for anyone using a Pro for live performances.

Although there are a handful of criticisms of the Kaossilator Pro, there's no doubt that it's great fun and offers a series of improvements on the original, introducing elements from the Kaoss Pad in order to come up with something altogether more powerful, useful, full-sounding and serious.

However, there are a number of flaws that currently stop it being the creative revolution it should be. We can only hope that a firmware update might fix these problems and unlock the full potential of the hardware. At an RRP of £350, Korg has effectively put the Pro up against much more flexible, more 'standard' alternatives. But given how much it has to offer, Kaossilator Pro deserves to be taken seriously.

Listen to the Kaossilator Pro in action: