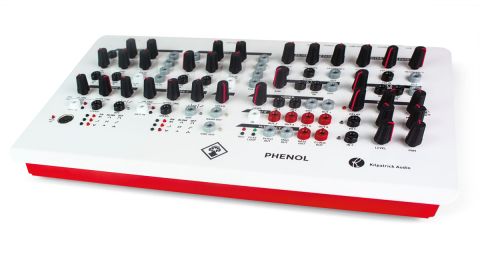 Fun and well-constructed, it's sure to engage experienced modular users and novices alike.

Launched via a successful Kickstarter campaign that put over £70,000 into the hands of Canadian synth designers Kilpatrick Audio, Phenol is attempting to position itself as an all-in-one analogue solution for those who have been sniffing around the world of modular synthesis, but have yet to jack in.

This small Canadian outfit is known for its previous production of effects units and the Eurorack friendly Kilpatrick Format modular.

But now Phenol appears on the scene looking like a futuristic prop lifted from the set of 2001: A Space Odyssey. Sleek and thoughtfully designed, the instrument relies on standard banana patch cords to cable together sounds from the sort of approachable architecture that's bound to lure even the most inexperienced of modular novices to have a play.

Weighing in at just over 2kg, Phenol is about the size of your bog-standard laptop computer. What you get for your investment are two analogue VCOs, two analogue two-pole filters, two analogue VCAs, and two digital envelope generators along with a sine/random output LFO.

Tack on to that a two input mixer, digital delay along with an Adder section (to output either a normal or inverted version of multiple signals) and a Divider for creating up to four digital outputs from one low frequency signal. With the addition of a MIDI to CV converter, a sequencer, and two external inputs to boot, you have all the essential elements to start crafting sounds.

Phenol's VCOs offer up triangle, sawtooth (ramp) and pulse waves, plus an external input (which are fed from the 1⁄4-inch line level jacks on the rear of the instrument). The duty cycle of the pulse wave can be tweaked either manually via the associated pot or by CV.

You can use the available Sync In jack to hard sync a VCO to an external source or Phenol's other VCO for further variation.

Onboard filters come in both low and band-pass flavours. Both two-pole filters also have an FM In jack so that CV signals sent this way will get the frequency rising and falling via the filter's cutoff setting. Phenol's two analogue VCAs can be controlled either via the Amp pot or via voltage input using the Amp In jack.

The most involved sections of Phenol's layout are the two onboard envelopes. Each envelope is outfitted with a trio of switches to alter the way the envelopes react.

As an added benefit, both of Phenol's envelopes can also function like LFOs ("where the output from the envelope ramps up and down continuously").

Along with being run in this oscillator mode, the envelope can work in either attack/hold/release (AHR) or attack/release (A/R) mode. Users can fiddle with the Up Time and Down Time pots in envelope mode to adjust how fast/slow the envelope reaches its maximum and minimum levels.

Envelopes can be controlled by the small black switches that sit alongside a set of corresponding LEDs to adjust mode, function of the envelope's Third Control knob and the polarity of the output (normal, inverted, or absolute).

The aforementioned Third Control subjects the signal to three further modes of operation. The first of these, where the knob is used to manage the smoothness of the output, is called Steps.

The Gate Delay selection determines how long the Third Control takes to respond to a signal entering the Gate In jack, and finally, Scale Quantize can be selected to quantise your signal to one of 16 different scale notes.

The envelope's Speed jack allows for CV changes to be made (either up or down) to whatever is occurring with the envelope, while its Gate In jack can pass gate signals to the envelope either by CV or by pressing an equally tiny button right alongside it.

For beginners the Phenol is akin to a Minimoog in that all its component sections are laid out fairly logically. With some basic instruction you can begin generating sounds for either straightforward musical expression or experimental sonics.

The onboard recorder will allow you to input notes and then replay them either as a loop or continuously repeating pattern. Phenol's onboard LFO delivers both random and sine wave based signals, while the very useful Divider can digitally split a signal two, three, four or six times to create more pattern-based options.

The VCOs deliver rich tones with only minimal drift as they scale up and down the keyboard, but Kilpatrick argue that, with the amount of plug-ins and other kit out there that try hard to emulate analogue imperfections, the philosophy behind Phenol was not to engineer out all the flaws that added character to these instruments in the first place.

Perhaps the biggest benefit Phenol delivers is the operational shift it brings to a user's compositional reflexes. When you dive in and begin to really play with the myriad of patching options, the sounds you tend to come up with tend to be more satisfying because of the greater depth of thought put into them.

Are the buttons that control the envelopes and the sequencer too tiny? Perhaps. Could the pots have a more robust feel to them? Maybe. But Kilpatrick maintains that those concerns can be fairly subjective and, when you factor in the company's reputation, Phenol looks and feels like a triumph. Hardcore Eurorack warriors might find it limiting, but others are sure to see it as a gateway drug that will set them on the path to unlimited sonic exploration.