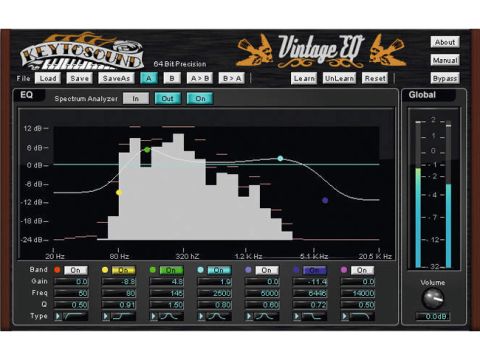 They might not be the prettiest around, but these amazing-sounding plug-ins are ideal for all mixing and mastering duties, and the low price is just the icing on the cake.

The Production Pack is a bundle of stereo EQs and dynamics processors from American company KeyToSound, which also produces the NexSyn soft synth.

The four plug-ins featured here are available separately, but given that they cost less than £100 as a group, this could be an unmissable opportunity to get your hands on some cost-effective signal massaging devices.

The first - and most unusual - of the effects in the Production Pack is the Dynamic EQ, which delivers 64-bit, zero-latency performance. The clever thing about this plug-in is that it offers compression-like control of EQ, complete with threshold, ratio, attack and release settings.

Accordingly, EQ changes are only applied to signals that exceed the user-defined threshold, with parametric control of frequency and bandwidth ensuring that you can be specific about which parts of the signal are affected.

This would be impressive enough over a single band, but Dynamic EQ provides four separate bands, each of which can be independently activated. Each can be soloed as well, so you can easily hear the effect of your chosen settings on each band.

In use, this plug-in is capable of delivering some amazing results. If you´re working with a singer who gets a little too raspy as their volume increases, Dynamic EQ can target the offending frequencies, but only take action when needed - ie, when a certain level is reached.

Similarly, bandwidth can be reduced so much that targeting individual harmonics within a signal is possible. Thus, if you have an audio source with problem frequencies in each octave, here´s a tool that will to fix them.

The Essential Compressor is a flexible dynamics processor. The ratio is limited to a maximum ‘squash´ of 10:1, but it does offer fine control in 0.1 increments. The majority of compressors only enable such high-resolution tinkering up to around 3:1 or so, whereupon they operate in integer steps.

This degree of precision is rare and makes Essential an ideal choice for mastering applications. Elsewhere, Attack and Release dials offer maximum values of 200ms and 500ms respectively, while the variable Knee control enables a number of options ranging from ‘hard´ to ‘soft´. Output gain ranges from -12dB to a maximum +24dB, which should be suitably generous for most applications.

The sound is wonderfully clean, so while this compressor won´t beat your signal to a pulp, it should certainly do a transparent job on mix elements or the final output. The only gripe here is that the graphics are unnecessarily small, with accurate readings of the virtual VU meters, in particular, being almost impossible without squinting. Doubling the size of the whole GUI would represent a huge improvement.

Be precise Next up is the Precision EQ, which is a comprehensive multiband EQ offering the visual aid of a Spectral Analyzer. This displays either input or output signals as bars behind the selected EQ curve.

Below the central display, seven EQ/filter bands are available, and these can be switched on independently. Activating a band places a coloured ‘ball´ on the EQ line to show its position and the cut/boost present at that frequency.

Each band can provide any one of seven treatments, namely: low-cut, low-shelf, bell, band-pass, band-stop, high-shelf or high-cut. Band-stop may be unfamiliar terminology to some, but this option simply behaves like a band-reject filter, plunging the level of the selected band to -24dB.

Gain for each frequency can be boosted by up to 12dB or reduced to -24dB, while the master volume dial enables up to 96dB of gain reduction to be applied.

Last, but by no means least, is the Vintage EQ, which does its thing via essentially the same interface as the Precision EQ plug-in. The sonic difference here is that the Vintage EQ doesn´t use oversampling techniques while processing, which the developers say would “ruin” its sound. As a result, the audio seems to be warmer than the Precision EQ.

In the lower mid-range in particular, it succeeds wonderfully well. Pianos and guitars warm up beautifully, and it´s great to find a plug-in that can cope with generous amounts of gain without becoming unbearable. Somehow, the Vintage EQ is a little more ‘general´ in its treatment of frequencies, producing a less focused, more natural sound.

We´d be recommending these plug-ins if they cost three times the price, so at under £100 for the bundle, they´re off the scale in terms of cost-effectiveness. They punch their sonic weight against much more expensive alternatives, and the Essential Compressor and Dynamic EQ in particular offer something different to most plug-ins on the market.

Whether you´re looking for in-channel processing or mastering tools for your final mix, this suite comes highly recommended.

For a more detailed review of the Production Pack, check out issue 123 of Computer Music magazine.