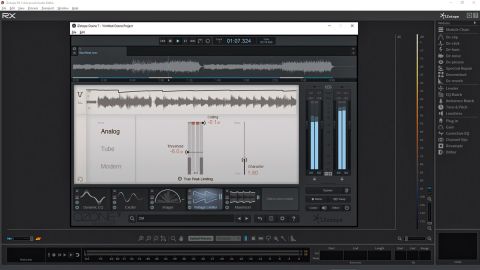 Ozone is iZotope's acclaimed all-in-one mastering system, intended to provide all the tools you need to produce professional-quality masters, with dedicated modules covering everything from EQ and dynamics to limiting and stereo image processing.

Like version 6, Ozone 7 lets you construct a mastering chain of up to six modules and comes in standalone and plugin formats (VST/VST3/ AAX/AU). For an extra £170, you can step up to Ozone 7 Advanced, which boasts three more modules, iZotope's Insight Metering plugin, ten of Ozone 7's modules in individual plugin form, and the new Codec Preview feature.

Key elements carried over from previous versions include the Maximizer module, with iZotope's proprietary Intelligent Release Control (IRC); the Imager four-band stereo image adjuster; the four-band harmonic Exciter; parallel/multiband compression with adjustable detection filters; and analogue and digital EQ modes, with fully adjustable phase response (all the way up to linear phase) and Match EQ mode for the latter.

Useful general features include stereo, mid/side and left/right operation; undo/ redo history; A/B/C/D compare; loudness compensation mode; and clear graphical metering throughout for visualising what each module is actually doing to the mix.

Although Ozone is intended for mastering, some renegade producers and mix engineers have been known to use it as a mixing tool. While iZotope acknowledges this occasional repurposing, it's keen to emphasise that Ozone is not designed to be a general-purpose channel strip - audio quality is always the main development consideration, and some of the modules can be very heavy on the host CPU. iZotope Alloy has a similar architecture to Ozone, but its modules are less resource-hungry and thus are far better suited to mixing duties.

First among Ozone 7's new modules is the Vintage Limiter, based on a Variable Mu design like the much-sought-after Fairchild 670, but not intended to specifically emulate that classic hardware.

Finally, Modern mode is the quickest, mixing analogue-style non-linearity with IRC limiting and transient reproduction - it's the least vibey mode of the three, but the most precise.

You could think of it as a real-time frequency-flattener. IRC IV will, for example, gently even out the frequency response of a kick drum that's too boomy, rather than let it distort the vocals or instruments when limited.

All three modes sound exceptional - it's in the upper tier of limiters, for sure - and of course, you still have the Character slider, increasing or decreasing the speed of the overall Maximizer response time to help hone the sound.

Users coming from the standard version 6 to Ozone 7 will be pleased to learn that the Dynamic EQ module first introduced in Ozone 6 Advanced is now part of the Standard package, enabling you to make responsive tonal adjustments to the mix only when selected frequency bands pass an adjustable threshold.

Ozone 7 Advanced edition also includes the new Vintage Tape, Vintage EQ and Vintage Compressor modules. Vintage tape is modelled on the Studer A810 tape machine, with a typical set of tape machine tonal controls (Bias, 15/30IPS, Low/High Emphasis) but none of the hiss, wow and flutter associated with using the real thing - good for gently sweetening and softening a mix.

Vintage EQ is based on the revered Pultec EQP-1A and MEQ-5, with the classic curves that the original hardware is known for overlaid on top of a spectrum analyser. Lastly, Vintage Compressor is a feedback compressor not based on any particular piece of hardware, but generally emulating the tone and movement imparted by classic analogue designs.

All the Vintage modules help to add depth and sheen to the mix, with their authentic analogue warmth and subtle saturation.

It seems that iZotope has done it again. Ozone continues to democratise the dark art of mastering and, with its outstanding module designs and helpful presets, really does put pro results within the reach of users at pretty much all levels.

Version 7 cements the software's place at the very top of the digital mastering tree, and if mastering is your main gig, the Advanced version is an essential addition to your setup.