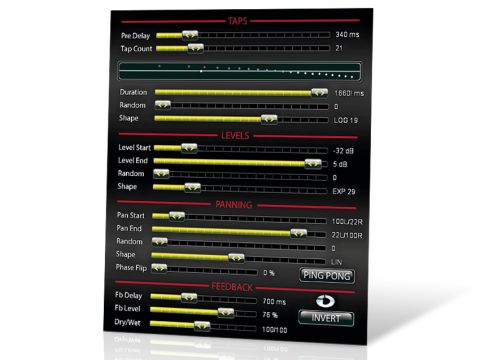 Far from a bread-and-butter effect, MegaDelayMass's multitap madness comes into its own for creative uses.

MegaDelayMass is a plug-in that treads new ground, taking the standard multitap delay concept and running with it.

In essence, it's a two-second multitap delay line with up to 100 taps. This is complemented by a host of clever features that modify levels, panning, feedback and the tap distribution itself.

To save you from the tedium of manually configuring 100 separate taps, you select an overall delay line duration and this is divided by the selected number of taps. These two parameters (along with a separate pre-delay) affect the spacing of the taps in time, and at the default settings, this spacing is linear - ie, there's equal distance between successive taps.

However, you can also 'shape' this spacing, so that the distribution is logarithmic or exponential, and randomise timings on a sliding scale (0-100%). You get the same shaping and randomising parameters for levels and panning, and additional phase and ping-pong settings for the latter.

"In essence, MegaDelayMass is a two-second multitap delay line with up to 100 taps."

To round things off, there's a single feedback loop with initial delay setting and phase inversion. If this sounds complicated, help is at hand in the form of the tap timeline display. This indicates as dots the spacing, panning, level (as intensity) and phase (blue or red colouring) of the taps. The feedback loop also appears as a square dot - with phase and level indicated.

MegaDelayMass is a complex plug-in, so we'll explain how it works in practice. Say you start with a two-second delay and select four taps - a linear delay shape will produce taps at 0ms, 500ms, 1000ms and 1500ms (the first tap falls right on the original sound, unless you set a pre-delay). To control volumes, you set start and end levels (-40dB to +6dB for each), and there are similar settings for panning.

But MDM can do so much more than just simple delay. First, an exponential setting for level, panning or timing gives a strong initial effect that 'winds down' over time. Conversely, a logarithmic setting will start slowly, gradually speeding up. So, with 50 discrete shaping options, you have excellent control over level, panning and timing 'curves', and taps can increase, decrease or stay constant in level over time. Factor in the ping-pong option and you can create some really cool stereo effects.

So, any complaints? First up, MegaDelayMass doesn't yet sync to host tempo, although ID says this will be added in a future update. It says that AU and RTAS versions are forthcoming, too, as the plug-in is currently VST-only. Also, the overall delay time is limited to two seconds, including the pre-delay.

As expected, MDM really is at its best when creating 'out there' effects, and this focused functionality may limit its appeal. Then again, standard delay plug-ins are commonplace, so if you've had it with run-of-the-mill effects, you'll find that MegaDelayMass is a real tweaker's dream, delivering very individual sounds for those who are willing to put the time in.