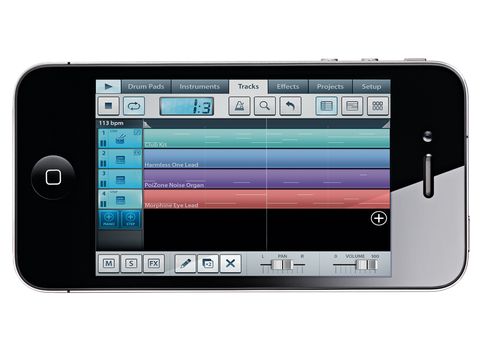 Since the mobile music world exploded into life with the arrival of the iPhone, FL Studio has been a prime candidate for porting to Apple's handheld devices.

From its earliest incarnations as FruityLoops, the program has been renowned for its ease of use and intuitive sequencing approach. With so many iOS apps aiming to recreate a similar blend of slick, professional sound and fun workflow, it seems logical that FL should work well on the iPhone and iPad.

It's worth pointing out that the mobile app isn't a direct port of FL Studio. In fact, it's not even a newly programmed app, but a re-skinned version of an existing app.

Image-Line isn't trying to hide the fact that FL Studio Mobile is based on Xewton's Music Studio. The companies have worked together to develop a product based on the Xewton code but with the appearance of FL Studio.

Users of both FL Studio and Xewton Music Studio will instantly be familiar with the layout of FL Studio Mobile. When compared to Music Studio, the most notable differences other than the FL-style visual appearance are to be found in the instrument selection.

Whereas the Xewton app features a large number of acoustic instrument samples, the instrument set has been updated to reflect a more electronic approach. However, don't expect to find the same instruments you'd use in FL Studio.

The collection of 133 presets includes familiar names - Sytrus Warm Pad, Morphine Lead and so on - but the instruments are much more basic than the plug-ins found in FL Studio.

The app's sounds are perfectly usable but they're all essentially sample-based presets, with editing options restricted to attack and release times. No direct control of filters or oscillators, no modulation and very little in the way of hands-on sound sculpting.

In addition to the synth sounds, a further range of drum and sample-based instruments round off the selection.

Taking its lead from Slicex, the Loops section offers audio loops sliced into sections for playback as individual sounds. Interestingly, the app doesn't offer in-app purchases of extra instruments, as found in Xewton Music Studio, restricting you to the presets and making the absence of editable instruments a major weakness.

FL Studio's synth plug-ins are some of its strongest features, so it's a real shame that the mobile version doesn't offer at least one or two synths based on classics like Sytrus and WASP.

With no audio recording capabilities, FL Studio Mobile's composition workflow revolves around its sequencing engine. The sequencing features are based on Xewton's setup but with the addition of a step sequencer.

Along with the piano roll, on-screen keyboard and pads it makes for a very versatile setup but for ultimate control the app also supports MIDI over USB via a Camera Connection Kit.

The reverb effect includes reasonably good hall, canyon and room modes, with adjustable size, brightness, stereo width and wet/dry mix. Reverbs can be rendered in low, medium or high quality modes, allowing you to minimise processor usage while working on tracks, then switch to high quality to bounce the mix.

FL Studio Mobile only fails in the sense that it doesn't live up to our expectations. There's nothing dramatically wrong with the app as such, it's just that it doesn't really offer anything special to help it compete with the best that iOS has to offer.

Where we hoped for proper integration with the full Windows version, we get the ability to export files. Where we dreamed of mobile versions of classic FL synths we get sample-based instruments with no custom options.

Perhaps most frustratingly, Image-Line has chosen to release two distinct versions of FL Studio Mobile rather than a universal binary capable of running on the iPhone and the iPad.

If you want to run the app on your iPhone and your iPad you'll have to buy both versions or make do with the low-res graphics of the iPhone version stretched up to fit the big screen. Graphic resolution aside, the two versions appear identical.

It's unreasonable to expect developers to create identical versions of their software for mobile platforms, but FL Studio Mobile is disappointingly weak in comparison to its Windows equivalent. The absence of editable instruments and custom samples significantly detracts from the appeal of the whole FL concept.

It's tempting to make comparisons with Apple's GarageBand for iPad, which shows how an application can be ported over to the less powerful mobile platform and offer a different feature set without losing much of its essential character.

FL Studio Mobile does a few things very nicely, but it simply doesn't improve on Xewton Music Studio enough to make it stand out. FL Studio users will be disappointed that the mobile app isn't closer to the Windows version, while users with no loyalty to FL will no doubt be tempted by other, more versatile options.

If and when Image-Line and Xewton introduce editable instruments, sample importing and audio recording, FL Studio Mobile will be a great option. For now, it's a solid enough app but it's seriously underwhelming considering how good it could have been.